In the lead up to Castle Assault this year and my well documented intentions to turn up with Green Skins I thought it would be a good time to share a few thoughts on my processes for building the Waagh. As always take it for a grain of salt but if you've got a fantastic strategy feedback is always great!

Like the Imperial Gaurd Orks should be the iconic army on the Epic Armageddon Battlefield. Sadly though this isn't often the case, anyone who runs Orks for any length of time will need to be prepared for the frustrations that comes with a list which just isn't on par with many of the other lists. That said I don't think all hope is lost, you will need to be tricksy and clever when you play and just live with it sometimes but orkies are definitely a fun force worth your time and energy. 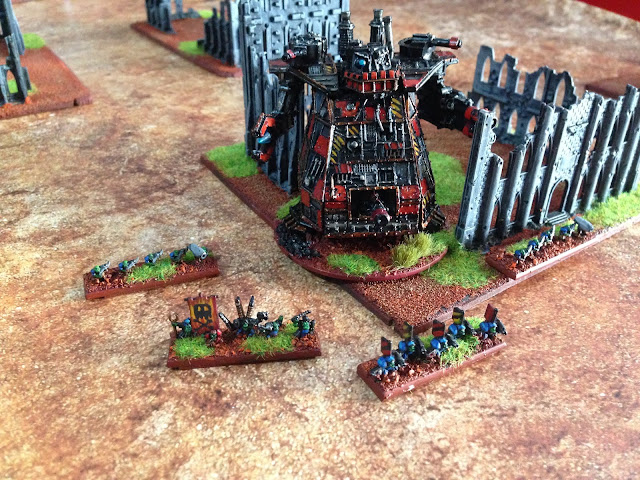 Power of the Waagh - the rule that defines the entire army, such a pain in the arse. Ultimately anything you want to include in your army you must factor in how much of a pain this will be. Dropping a landa, no problems! Want to barrage with your gargant, better count on the -1 from moving double first. The rule really robs the flexibility from the list overall and basically drives all of my opinions below. One thing to consider though is that you don't have to be totally obsessed with it. Something to remember is that sometimes failing the test is ok, if you desperately need to sustain for example failing the test for sustain and shooting with no modifier is still better than the double move for the sake of it. The trick is just that often you really need to move.

Mob rule - another rule that potentially looks good but in reality doesn't help much. Fantastic for things like your gargants but when you start boosting core mob sizes to gain the bonuses you'll often end up sacrificing activations which is so critical to Orks. I generally don't field anything less than 12-13 activations in 3000pts because of how quickly some of your activations will die. 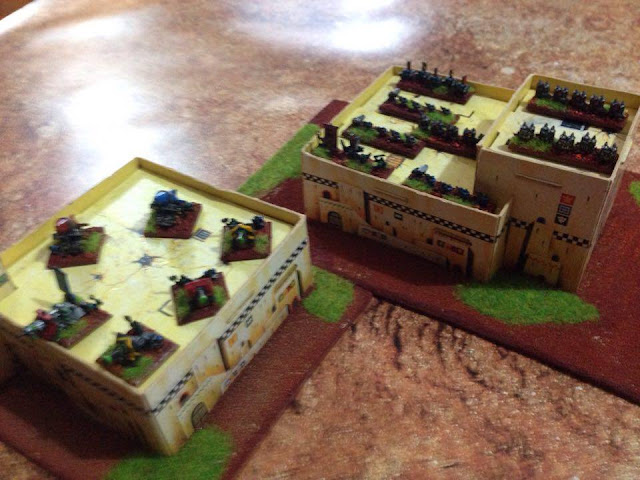 Core choices
Blitz brigade - never leave home without them! The most common build around my area for these guys is the standard unit with a zzaap gun mekboy leading them, at 200pts they are a cheap unit that moves fast and can potentially do a notable bit of damage before being inevitably blown to hell. Gun wagons of course are complete pus because of the need to double and shoot but they might absorb a bullet or 2, flak wagons are possibly the worst AA in the game (except for stalkers of course!) but there's no harm in taking a few, might as well spread the little bubbles of death around where possible. I've seen some other interesting attempts such as a double size mob with double mekboys to get a BP4 macro shot but my feeling is that you can get that easily enough in other places anyway. I usually run 3-4 of the basic zap gun variants and never regret their inclusion.

Kill Kruzer - never used it, never missed it, seen some people try but it never lasts. There are better ways to spend your points

Kult of speed - these units are also an auto include to me. Personally I'm a fan of scorchas for their awesome FF capacity more than any shooting abilities, I'd encourage anyone to experiment with the standard 8 and the big mob option too. It's about the only place I ever look hard at expanding the unit size. Bikes are also a solid option if you prefer them and you could do great things combining them together. No real upgrades needed 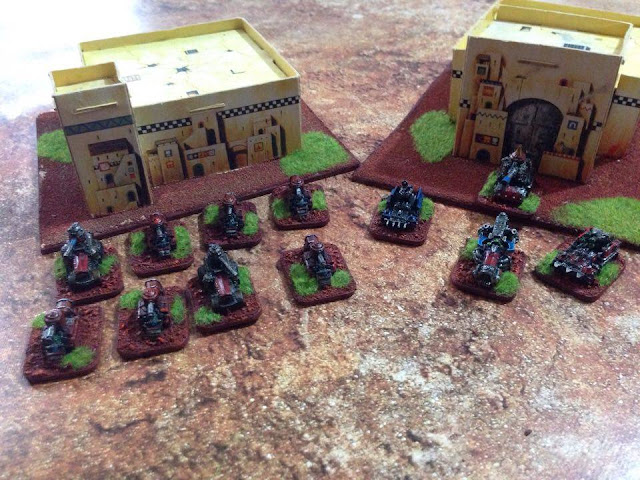 Mekboy gunzmob - I think this is one of those units often overlooked but I'm a big fan. I like both the basic unit and the double sized mob. I like them with a zzaap gun on overwatch/garrison and I like them just as basic units to throw blast markers and hold objectives. If you have guns give them a go.

Mekboy stompamob - personally this unit annoys me. Stompas are garbage in my experience but I really like the supa stompas for the macro fire support. I really wish I could just buy the supa but sometimes I just take the hit and run the unit. Damn expensive though.

Boyz Warband - another unit that I'm not a huge fan of which I know goes against convention. Many of my opponents have traditionally run a normal or double mob with a mekboy in a forward garrison position. Personally I've found that their weakness to FF engage limits the effectiveness of this idea and it's just points flushed many times, each to their own. The other use of course is to load them into the landa and they are great there without doubt. A bit of of a one shot weapon but one that can make a huge difference. An interesting alternate load out for a landa is bikes and scorchas though so experiment with these options.

Aircraft and Gargants
Unlike most other armies for me the 1000pts available to spend in this section are spent every single game, it's just a question of how. 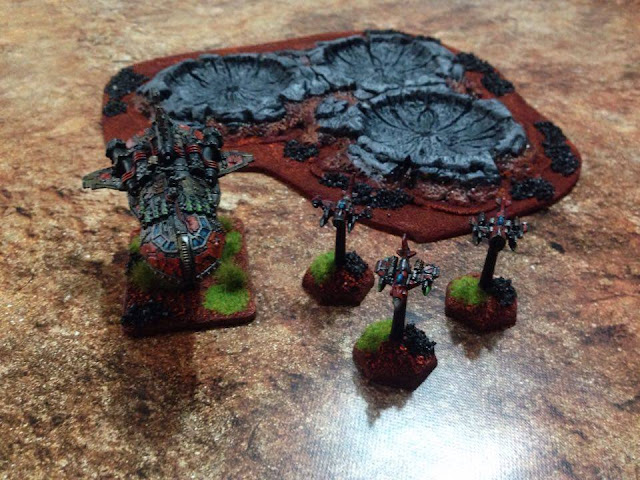 Gargants - I pretty much always run a gargant of some sort, they are an awesome concept for Orks and luckily do ok on the table too. My usual combo is either gargant/landa/fightas or just great gargant/fightas with the army built to support it. The guns on them are great and don't suffer too badly from the -1 and the FF support can be even more amazing if you are using things like your kults of speed well.

Landa - I've got a couple of lists with 3 landas in but usually it's just the one. Best bet is to save it until one of the final activations unless a seriously juicy target appears. In the following turns I don't bother with the recycle tactics associated with thunderhawks but being able to spray a few bullets at a broken formation or equivalent can be great as can the ability to land/contest an objective in an emergency.

Fighta Bombas - versatile, cheap and powerful CAP isn't much of an option but intercept and ground attack are both good and the ability to shoot everywhere is awesome too. I think the magic rule is to not be too scared of losing them, if you need to fly through a flak bubble to potentially take out the Deathstrikes, do it... Every time.

Objectives and general strategy.
Movement is key - The absolute secret to winning with Orks is no to play them like the fluff....  If you just charge in a big wave yelling Waagh you will all get horribly slaughtered. See the trick is that in the fluff Orks probably have about 10x the points of the enemy force so they can absorb those casualties and still win. Sadly in this game you will need to be more clever. Speed your greatest asset along with activation count. You can easily contest any objective, defend your blitz etc so do it, all of it. Preserve those small fragile activations as best as possible, hug cover with the infantry, save your planes for something really useful etc. Being able to out activate your opponent before throwing in that massive air attack at the end of the turn can be amazing. Look out for the awesome synergies that exist, throwing the gargant up can be great not just for the shots but for the sneaky clipping engage you follow up with from some scorchas or stormboyz. If you don't have anything good to do, just doing donuts in the corner isn't the worst idea in the world. Don't be afraid to sustain fire if you know that moving isn't something you need to do, failing and just shooting without a penalty is still better than the double move/shoot a lot of the time. Learn how to use grots in an engagement, those free hits can be amazing. Save those blitz mob zap guns for something really important, like I've said before they are essentially a 1 shot weapon a lot of the time but do have some impressive range. One last thing to consider is that Orks have a strat rating of 3, yeah it's not great but it's better than a lot of armies and can be exploited with a last activation zip up the board followed by a first activation punch of some kind...
None of these things are absolute rules, all of them are just ideas and the reality is that some opponents and army builds are just going to be too tough, if you come up against someone as good as you running Eldar for example just go grab the tissues, they can out move you, out shoot you, have amazing FF engage and artillery options... Live with it, that's the nature of the army. 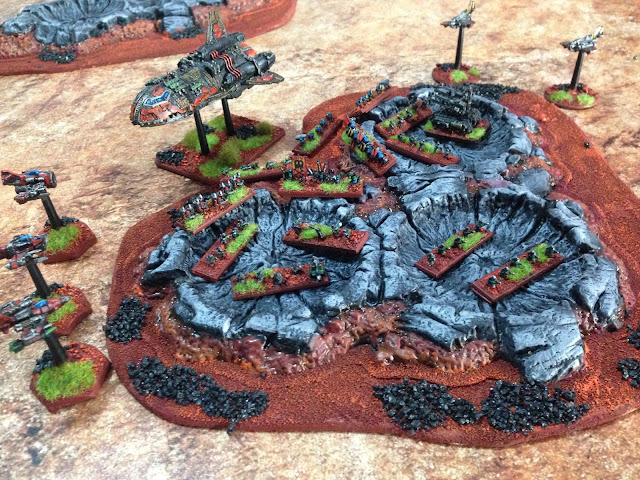 Objectives
There really are no great rules here, you need to experiment. Against slow opponents spread out the objectives to utilise the advantage of speed. Against faster opponents it's not so important and perhaps you will be better to group your two together so that the gargant can contest both of them. Try and find the best possible terrain to put some garrisoning gunz/boyz in which can be a great way to protect the blitz. An overwatching zap gun is a hell of a deterrent for a thunderhawk drop which won't even get a chance to unload if you're lucky.
Your BTS should be fairly safe if it's a gargant and there's might just be kill able with a well timed engage from the lander so see how that one goes. I can't imagine you having trouble getting into the enemy half of the board and In fact the awesome board control Orks can get makes it difficult for more conservative opponents to get into yours sometimes.

Overall Orks are a great and fun list, I've posted some sample builds below to give you an idea of what I like to run but so much is personal flavour. I've also seen hordes of vehicles with no real infantry or war engines and that was pretty intimidating if that's the style that works for you, play them in the right spirit (ideally whilst drinking) and don't take yourself too seriously. If you're looking for a super competitive build go dig out some Gaurd or Eldar, the rest is up to Gork and Mork!