Ever had one of those games where the dice were genuinely stupidly in favour of one player… Well I just played 2 of them… Tonight saw me blowing the dust of my Necrons for a change and my long standing rival Mick Fair arriving with a codex Astartes force based almost entirely around big air attacks engagements. The builds looked like this: 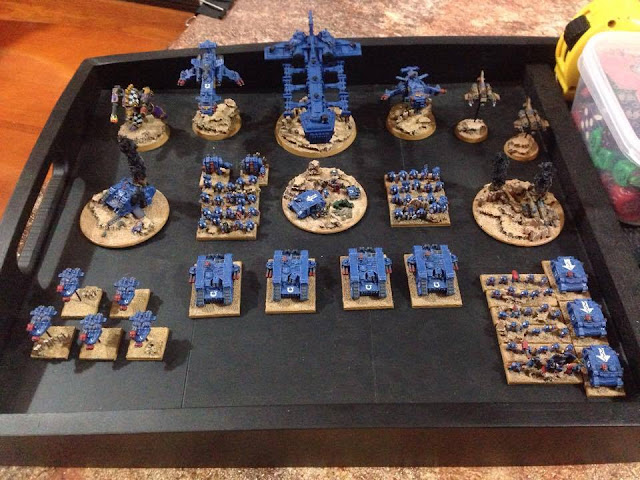 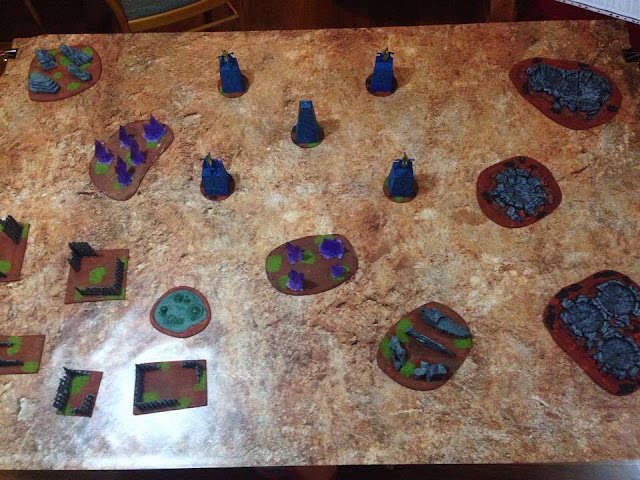 Objective Deployment
Good objective deployment is absolutely vital in Epic, many games are won or lost entirely in this phase. I for one can remember my first game against Knights where I grouped all my objectives together and this played massively into my opponents hands. Good objective deployment starts with strategy rating, having higher strat rating means you can force your opponent into corner deployment if that works, especially good for Eldar/Space marines builds that include double pie plate barrages from space but having lower strategy isn’t the worst thing ever.
In this case I knew I had lower strat so the advantage is that I get to see where the marines deploy their objectives and respond accordingly. This wasn’t so important with the Blitz but I was going up against a huge air engagement force and using fixed ground based AA. When I saw the marines place their first objective near my blitz I placed my 2 beweeen the marine objective and marine blitz. Essentially I made sure we were only fighting over half of the board giving me maximum AA coverage. The second marine objective went way down the other end of the table because Mick reckognised that for take and hold he only needs to focus on 2 of the 3 objectives in my half of the board in this case he was going for Blitz plus 1, by spreading them out he made it hard for me to take all 3 on my side without moving well beyond my AA coverage. 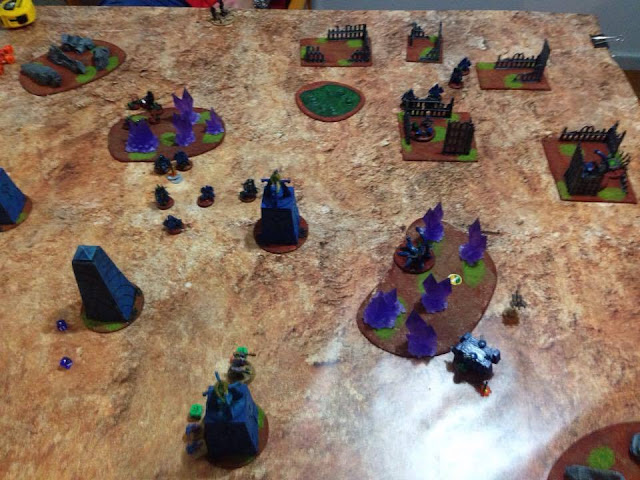 Turn 1
Marines have deployed the warhound and the land speeders in a protective scout screen on overwatch. The rest of the marines are loaded into thunderhawks and landers. Before turn 1 the Necrons deploy all of their monoliths, pylons and a warbarque.
Necrons win the strat roll!  Not quite sure what to do with this unprecedented result they awkwardly move up and put a blast marker on the land speeders followed by the obelisk clearing it's blast makers. Thus essentially ended the game…

Marines start to angle in a thunderhawk with the goal to break and pick off one of the pylons, they have rightly decided that bringing landers into range of double pylons is just too risky. The first Marine drives into battle cannon range but is blown out of the sky by a single crit from the pylon bye bye tactical marines and supreme commander with it…
The necrons continue to stall after gaining a lucky advantage….
The second marine thunderhawk flies in along the same path as the first and with the same goal… guess what… yep… same result…

Game called without a single marine's boots ever making the table… well, not in a controlled way anyway. 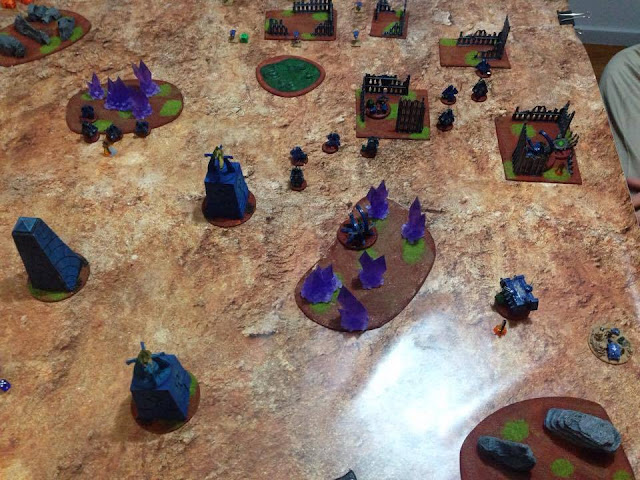 Game 1 Highlight! Clipping assault example:
One interesting thing we did get to see in this incredibly short game was a solid example of the clipping assault tactic I’ve been recently discussing. Check out the pick and you will see the land speeders carefully positioned to provide FF support whilst also causing the monoliths to move towards them an away from being able to respond effectively to the warhound that would trigger the engagement. In this case I managed to turn the tactic slightly to my advantage as the obelisks move 30cm so have a 10cm counter charge, one of them would use this to make BC with the land speeders bringing them into the engagement and actually putting the warhound out of FF range. Tragically this didn’t achieve much anyway, the contacting obelisk’s reinforced armour was no match for a difficult terrain test and the units 7 attacks failed to do more than scratch the paint on the land speeders whilst their melta attacks would take down a monolith… Net result was a win to the marines but the fearless ron’s just shrugged with a robotic nyah. Still a good example of how to set it up and what an (potentially!) go wrong. 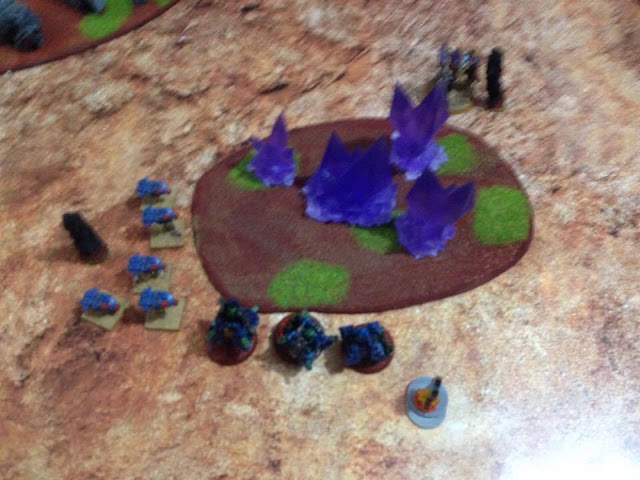 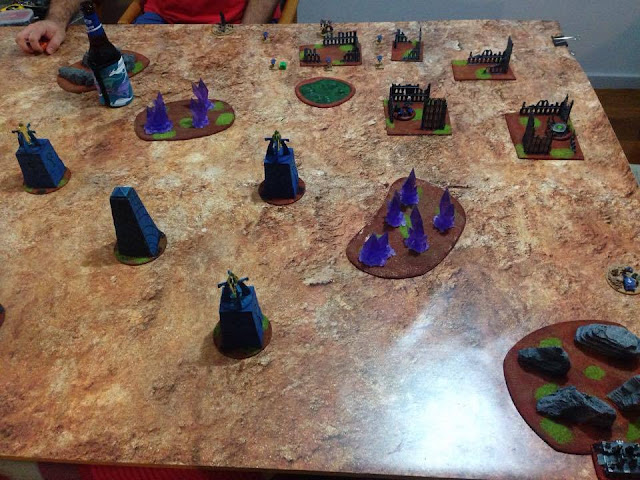 The deployment looks a little bit different this time with the warhound and speeders deploying a bit further away from the necron objectives in an attempt to force the rons away from their AA bubble. Necron turn 1 teleporting looks very similar to last time though with a little less distance between the pylons to make it harder for them to be separated and picked off by the thunderhawks.
Turn 1
Marines win initiative
Along comes the thunderbolts to break the pylon that took a blastie on teleport but both get shot out of the sky by the pylons that are still going nuts… oh dear.

The rest of the turn was pretty much a non event. The thunderhawk with supreme commander failed to activate on a retain. The land speeders zoomed onto the Necron board edge before being hunted down by warriors leaving one alive. All other marine forces stood down. The speeder rallies and a few Necron formations clear blasties.

Lander comes on the board but takes 2 TK shots from the pylons, a crit makes it fall out of the sky. It takes the terminators and the land raiders with it.

Mick shakes my hand and we call two games in 130mins 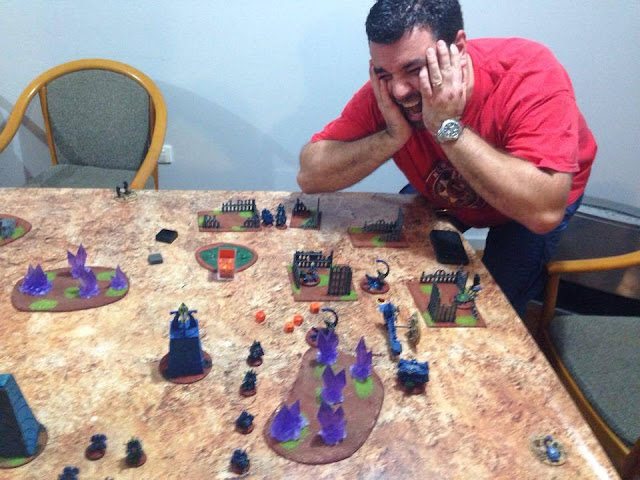 Conclusions
Airborne marines just can't do much against Necrons that are well positioned. The marines entire plans focused on breaking the pylons which had taken blast markers as part of teleport actions. Had that worked it would have made a huge difference to their assault potential. In this case I was stupidly lucky with crits but you don’t need to be too lucky with Pylons to shoot down a thunderhawk... and if they get on overwatch its even more nuts. Forcing the marines to fight for territory around those pylons gave me a huge advantage because they had no choice but to come into the AA bubble. In hindsight I could have done it even better by deploying my blitz objective directly opposite the marine one and putting my objectives in the space in-between. By contrast the marines could have forced me into corner deployment allowing for a greater space between the possible objectives and forcing that AA bubble wider. The other thing to consider is that this necron list was only running 2 pylons, I could have easily fit a third into the 1000pt allowance and if I were playing in a meta with more air assault than Aus currently has that would be a  solid option.


So overall not a great test of either generals skill or builds, dice just made this one a real write off. Still if you’ve ever had the pleasure of watching me play necrons you’d know why I won’t feel sorry for anyone’s dice… The 3rd time that my C’tan died to a crit on the first wound in the first 4 games was the last time I included that guy… That included such notable deaths as being flamed to death by Skorchas in engagement… and beaten to death by a warhound titan in BC…
Posted by Unknown at 21:09:00