How to smash stuff real good with Feral Orkz

Ever heard that phrase don’t bring a knife to a gun fight… well when you run ferals it’s kind of like this:

General build philosophy – Something to remember with feral orks is that flexibility is not in their vocabulary, it’s a paper/scissor/rock sort of army except all you have is various sizes of rock. Sure you can experiment with different options but with no real shooting or speed options, no planes, spaceships or flying anything it will ultimately fail. Now the thing to remember is that this isn’t a problem in my mind, rock is fun, you can get real good at playing rock and if you’re careful can become the Chuck Norris of rock.

Army Special Rules - Ferals are no different to standard orks in that you can’t possibly make an effective build without due respect for the army rules.

Power of the Waagh – This rule can be a real hindrance for normal orks who might otherwise be attempting a range of tactical manoeuvres. For ferals your choices are much more binary because it’s all about engagement and your shooting isn’t worth a damn.  Double and shoot is a pretty solid option usually because all you’ll do with your shooting is lay a blast marker most of the time but don’t be afraid to triple move at times. Do the math on where you need those dinosaurs to be next turn and if need be take the risk. I tended to save my sup com especially for these sorts of risky rolls and of course a solid build will definitely out activate most opponents giving you the luxury of seeing where the enemy will be and planning accordingly. Also don’t underestimate your strat rating of 3, especially against all those armies that are only 2 it’s another factor that’s worth a gamble with a late turn aggressive advance followed by a beginning of turn major engage. It’s the closest ferals have to a teleport assault.

Mob Rule – Another binary component in ferals is the size of the units. Pretty much everything falls into the category of small and hard to rally (e.g. boar boyz) or so damn solid they rally really easily (like Orkeosaurus units). Play to that because your opponent will. Be conscious of things like your AA bubble because a clever opponent will absolutely snipe your small units to reduce your activation count if they can.

Boarboyz – Absolutely essential to the army in every way. Not only are they cheap spammable deployments and activations but they are also a solid engage unit that allows you to get more value out of the bigger formations. I ran 4 units of 5 in my build at Castle Assault this year 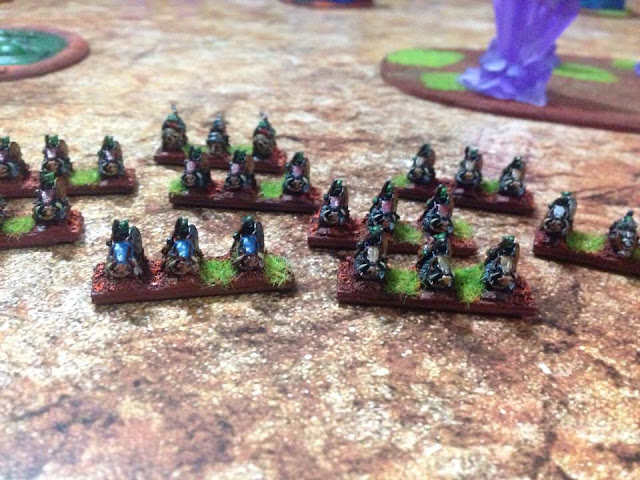 These awesome boarboyz are available from Microworld games

Junka Brigade – Personally I don’t see the use of this unit, not fast enough to solve one issue the army has, doesn’t hit any harder than boar boyz and costs much more. Not to mention being light vehicles which is always a  problem.

Madboyz  - Again not too sure what the point of the unit is. Sure they are fearless and can have multiple wierdboyz but lots of units can have wierdboyz and frankly their shooting and AA capabilities aren’t that good. I prefer to spread the wierdboyz around the army rather than putting their AA bubble into a single quite fragile unit.

Steam Gargant – An utterly essential unit, these guys represent the only hint of flexibility and decent shooting you can have in the list and a full 3 man 500pt version is a solid BTS option too. I maxed out the guns on mine for a 12BP macro barrage and never once regretted it. 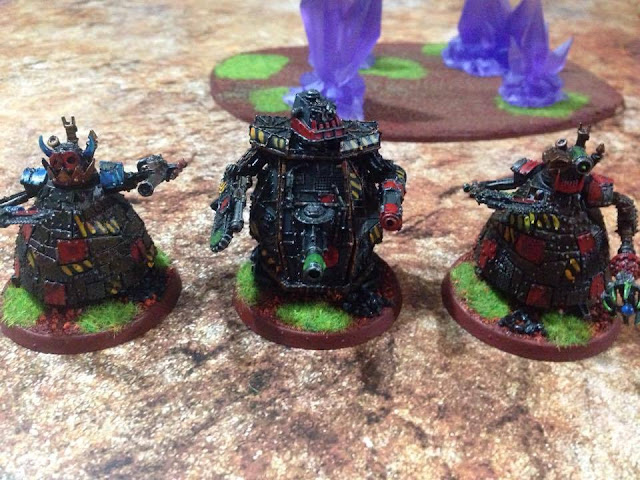 Trappas – I ran a unit of these in my Castle Assault force because I was concerned about teleporters possibly hitting my steam gargant unit. Their scout option is handy to prevent this and the unit is cheap enough that even it isn’t needed for this it can be a handy objective grabber/blitz guard etc.

Warband Vs Wildboyz – Building this army I spent a bit of time deciding between these two options. The conclusion in my mind is decisively wildboyz, for a range of reasons, the most obvious being the 75pts difference in the basic unit. Consider what you are getting for 75 points. It’s the same number of boyz each time with identical stats except that the “proper” boyz get the world’s crappiest gun which will make precisely zero difference in 99/100 games. They both get the same nobz so that can’t be it. Ultimately then for 75 points the only valuable difference is the two grots. Now grots are great, their ability to soak up free hits in CC can be amazing for orks but the difference is in how they are used in Ferals vs normal. When you have a boyz mob jumping out of a landa directly into engagement they have great value, but ferals don’t work like that. Ferals have giant hit sucking dinosaurs to back their engagement potential so grots really don’t have much of any value in this equation. Sure they could suck up a macro or TK hit sometime but that is so situational. Ergo it’s the cheap spear chucking option for me every time.
So what about upgrades, there’s a pretty reasonable selection here. Personally the only 3 I think are worth considering are Squig catapults, Orkeosaurus and Wyrdboyz, each for their own reasons. At CA I ran 5 units of wildboyz with an Orkeosaurus and found them consistently amazing. Their BC engagement potential is phenomenal and much like the synergies that DKOK Gorgons are famous for the Orkeosaurus is fantastic for tanking the first 6 hits of the engagement leaving your ork boyz to chop away without much risk of their crap armour coming into play. You do have to be super careful about positioning though, watch out for FF support etc which can eat through your boyz fast. I found that more often than not my boyz never even got off the dino, they tended to just sit there and watch while the dino and nobz did all the work anyway, in combat not dying can be just as important as the kills you actually achieve. In FF the dinos aren’t bad either, likely contributing 2 hits and unlikely to take much back they can do big things to a unit that has been suitably prepped with blast markers and/or is supported by something else like a second Dino. Or even just to support an engage started by boar boyz which are fantastic for both BC and clipping FF engages if suitably supported. Never underestimate the resilience of a boyz mob with Orkeosaurus for blast marker resilience and with 2 leaders their ability to shed the ones they take is also amazing.
Wyrdboyz are something else essential to the list. It’s the only AA you have and in my mind you need at least 3 to cover your army suitably. There are heaps of good opitons for them to go, on an Orkeosaurus works great but you could also chuck them into a unit of boyz on the ground if that works for you.
Squig Catapults are the last upgrade that I reckon are worth considering. I ran 3 of them in boyz units as forward garrisons in my build at CA and they went ok. The BP3 disrupt option can be fantastic and having blast templates is always a good thing. Those units were a bit hit/miss for me though and next time I’ll consider just replacing them with wyrdboyz who give the unit just as much reach in terms of putting down a blast marker/prepping for a boarboyz engage and would improve my AA coverage substantially. 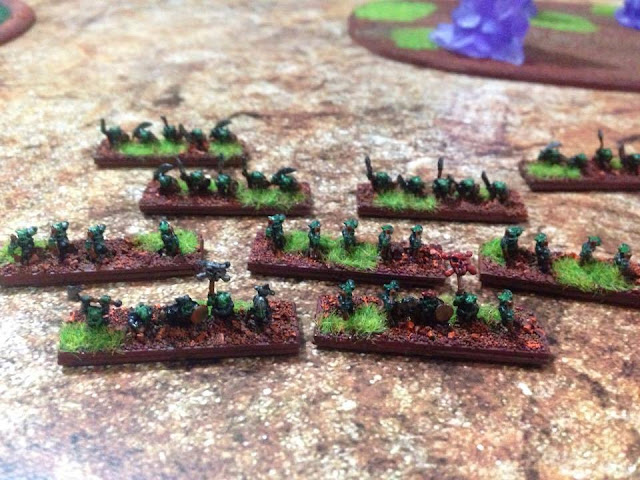 These feral ork proxies are also available from Microworld Games and do the job perfectly. I've used sword/spear armed guys as wildboyz and bowmen for trappaz

Strategies
Just because they are feral doesn’t mean they are simple, in fact feral orks are going to be a bit of a learning curve, engagement is everything so the real trick is maximising your engagement potential. The big advantages you should have is resilience and activation advantage, hold back the dinos until the end of the turn and remember to always use them in pairs/small groups so that you get lots of support fire. Base contact engage can be tricky to pull off at times but one thing to remember is that you can move the Orkeosaurus forward then offload the orks within 5cm giving you a fair bit of range if you need it. Balancing that though is the fact that you will want that dino to be in BC in order to allocate the hits to his awesome armour where possible. Like I said before, you basically have 1 strategy but it’s a matter of refining it. Orkeosaurus go from amazingly resilient to amazingly soft if you let them get broken by a poorly timed engagement. Also remember that the guns on these beasts are basically only good for one thing and that is prepping an engagement so focus on that.
As for objectives, for this army its all about aggressive movement, grind your way up the board every turn and focus on the objectives in the middle of the board. In my tournament games the most common result was 3-0, I didn’t lose my blitz but I only took it off the enemy once, never lost my BTS but only killed theirs once. Blitz and BTS were definitely the most challenging because the army lacks the shooting to capitalise when you need to and lacks the speed to reliably grab the Blitz. That said it was reasonably easy to spread myself out enough to keep the enemy out of my half of the board  and super easy to have models in the enemy half. 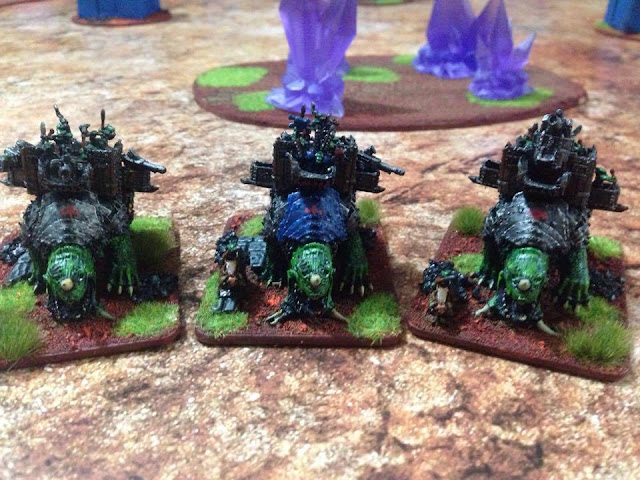 Though these Orkeosaurus models aren't available commerically this awesome proxy can be obtained at a great price by emailing nicr@eurekamin.com.au 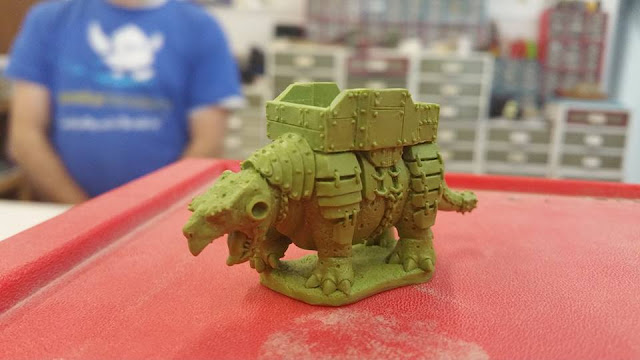 Castle Assault 2016 Tournament Build
If you haven’t yet discovered by tournament report from the Castle Assault tournament you should go have a read of it to see how I got them to move.  Feral Orks at CA2016