Tactica Squats - How many battle cannons is too many?

So I'm stepping out of the usual mould this time round and actually discussing EpicUK squats rather than NetEa. The reasoning is very simple, there is no approved NetEA squats list, the best we've had is developmental and thanks to some jerk abusing the list at this year's Cancon even it has been sent back to the experimental phase. Given that list development tends to take years I wouldn't hold my breath on getting something proper anytime soon. If you are a squat lover I'm sure the Squat AC over at Taccoms would love your support in the new development but until then I'd suggest you stick with EpicUK squats which of course are fully approved and have recently been updated so you can assure they are as balanced as you will ever find. 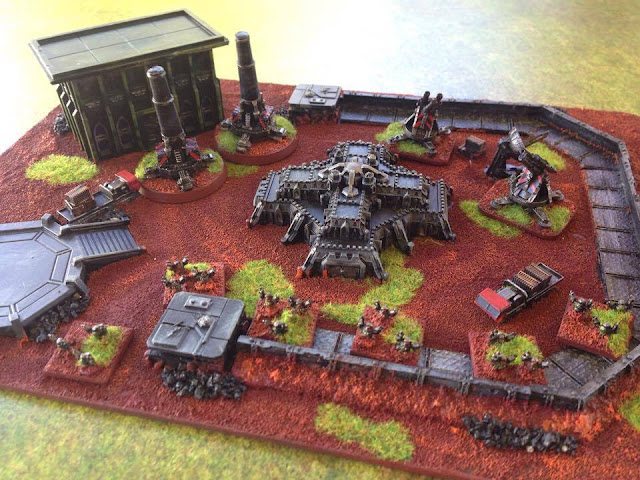 Hold the line! Goliath Mega Cannons and Thunderfires are a solid combo

Squat warriors - These guys are much like tactical marines or some core formations for Gaurd, jack of all trades but masters of none. In epic what that means is that you have some guns but not enough to shoot anything much, you have some CC and FF capacity but your armour is still crap. This is not a unit in ever a fan of because I prefer more tailored tools, for that reason I just don't run them.

Squat Berzerkers - This is my go to formation for core troops in squats. Their extra BC engage hits are good and they have the same FF as warriors. The Hearthgaurd carries a gun which allows you to zoom up and put a blastie on something if needs be and most importantly they are cheap as chips. That Hearthgaurd gives you inspiring as well which is just fantastic. I usually run 3-4 min sized units of these with most in rhinos but with 1 unit in termites which are fantastic for popping up under an objective in turn 3. Your warlord could go here if you like or in a bike unit if that floats your boat. 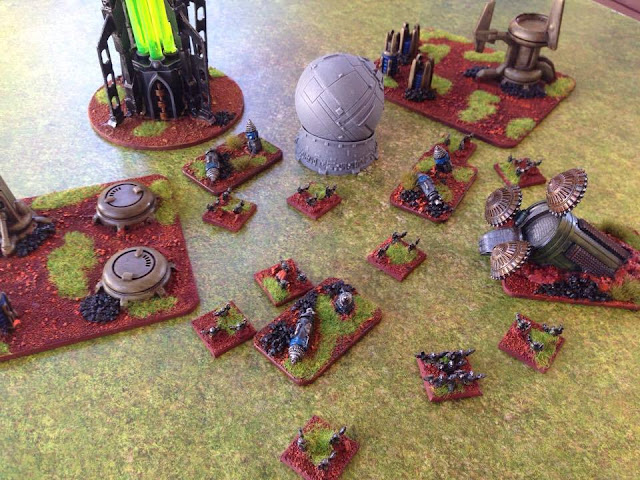 Berzerkers emerge from tunnels to take the defence platform

Bikes - fantastic unit, fast, hard hitting cheap and effective. The trikes are a mandatory upgrade in my mind. The only wierd part is the guild master whose light vehicle status makes him prone to random death if you aren't careful. Definitely a 1+ unit for inclusion

Iron Eagles - certainly not a cheap unit by any terms but if you feel the need to take scouts this is your only option. Personally I never felt the need and I think there are much better options around. For firepower I go with overlords, for speed I go with bikes and scouting I don't stress too much about because your big war engines are solid as and you can easily cover key units with placement of things like Berzerkers.

Overlords - Easily the best unit in the entire game and in fact it was my (ab)use of these at this year's Cancon tournament that caused such controversy that Netea squats were sent back into extinction until a full review could be conducted. To be fair I took 5...  Their firepower is amazing, as is their armour and they come with built in AA and solid FF support. They are just a really easy unit to get value out of. Support combines the best parts of skimmer for your benefits but you do have to be careful at how visible you are for return fire. I would consider 3 to be a friendly level of inclusion, 4 to be optimised for competition, 5 or more you should buy your opponent a drink first because what you are planning on doing to them is rude.

Heavy support - robots and tarantulas are both useless in my mind but the other two so have some potential. Mole mortars are the unit that get the most attention because of their potential for 6bp with disrupt but considering their range is literally 30-60cm the unit becomes problematic. You will need to garrison forward to do much which means you could be outside of your AA bubble and after a bunch of games with and against them they lost their shine to me.
Squat light artillery has lots of range and some potential but I've always looked at them and compared them to an overlord which for similar points is just so much more flexible in basically every way. So unless you are experimenting it going for a particular theme I don't see much value in any of these units.

Thunderers - nyah, there are so many better options for whatever role you are considering.

Thunder fires - Absolute must have, with no flying AA you need solid ground options but with their great range and hitting power you won't regret this unit. Coming with transport gives you lots of flexibility and resilience to blasties so I would definitely include a unit of these. I'd run two if I didn't have the overlords to provide extra AA bubbles. 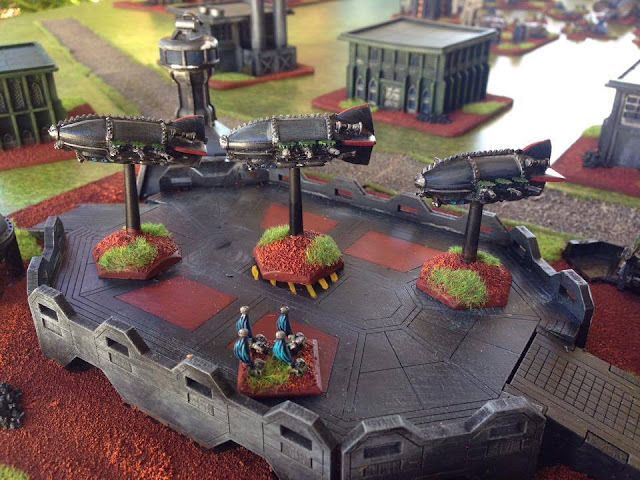 Overlords launching from their landing pad to bring the rain

The very definition of spoilt for choice, ultimately it will come down to individual preference what you spend your points on here but I can't imagine why any own would run squats without spending some points here!

Goliath Mega Cannons - a truly amazing artillery unit, phenomenal range and ignore cover to really put the pain on light infantry or even hit heavier infantry like marines that want to hug rhinos. Also the 6bp for the bonus blast marker can be important. I would basically always run a unit.

Colossus - A solid all rounder with plenty of shots and the option to do one glorious 11BP barrage that could catch many opponents off gaurd by instantly breaking every DC3 war engine and unit you can cover with 3 templates. Having been on the receiving end of that I won't underestimate it twice.

Cyclops - What it does it does amazingly well, but how many big Titans do you come across really... I think it's too one dimensional for my liking

Land Train - the opposite of the cyclops and in my mind the best of a great bunch of war engines. Some people go for lots of cars and options but I've always kept my lean and mean. Usually I would run an engine, bomb car and 2 Berzerker cars so I get a nice solid 4BP macro along with 3 shields and 5DC without spending too many point. You could add another car or two if you wanted to make it more aggressive but being so slow it's a solid blitz Gaurd/BTS combo. 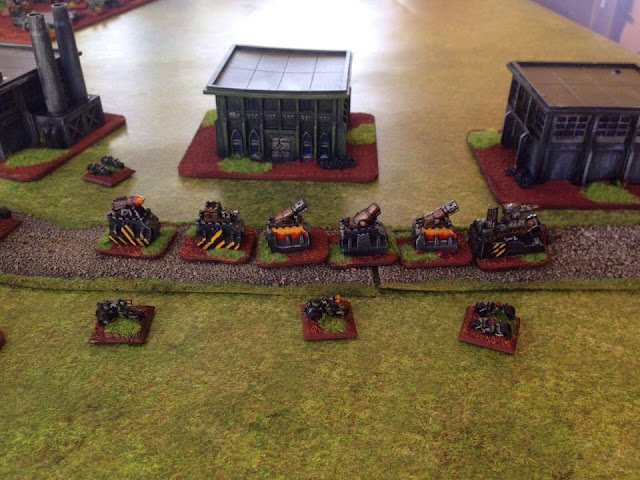 Squats are a grind army more than a big dramatic hit sort of army. You will want to be positioning your objectives close together and close to the enemy objectives. You don't have a huge amount of speed options but you can if needs be. You would split them against other armies that love frontal smash tactics like Knights or Titans but generally you can rely on your amazing firepower to carry the day. Focus on finding a spot for your blitz that your train or other war engine can babysit whilst having great lines of sight. Or alternatively find somewhere with no line of sight and drop the goliaths down as the blitz gaurd and advance with the train. Experimenting here is important because the train can be such a solid gaurd but it also is great for FF support.
Traditionally I would grind my way up the field for 2 turns using battle cannons and templates to blast everything in sight. My Berzerkers and bikes would be looking to synergies with the overlords and the train to find nice clipping engages where there bad armour isn't a big issue and they can win on static res and FF support from the war engines. I usually would have a unit of tunnellers in the tube which would pop up in turn 3 either under the enemy blitz or on an objective in their half. You could try and be super clever with these though and have them pop up in one of your objectives or something if needs be, again experimentation is key.
Overall if you play it well Squats are an extremely powerful force. The trick is to keep moving forwards each turn even if you have long range shooting because you can't do massive zoom forward moves like Marines or Eldar love to do. If in doubt read up on standard American military philosophy, blast everything in sight with overwhelming firepower and send in the troops to sweep up the remains, it works for them and it will work for you!

12 Activations with 11 on board at all times and the 12th tunneling up in turn 3 wherever you feel you can wreak the most havok. Berzerkers are a great unit for getting right up in people's faces and hit pretty hard whether its in BC or engagement, just be careful of copping too much return fire because of their low armour values. The Artillery and train give you excellent long range double template blast options with both Macro and Ignore cover being fantastic in the right situations. Thunderfires are there to do exactly what you would expect and the overlords are really just there for mobile fire support options. Their range and firepower are both outstanding and they can do a nice amount of FF support if you can combo it properly. Just be careful with the bike unit. It's not really there for a proper fight, more just an escort for the Sup Com.