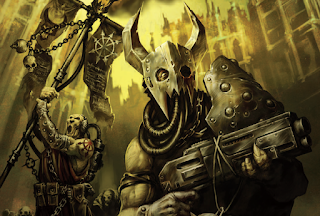 Friday night fight night rolls around again and this time It sees my inaugural run with the Lost and the Damned. I'm a huge fan of the Redux version available here on Tactical Command which has an awesome theme and collection of chaos units to back up your veritable horde of cultists. Its a much more interesting list than the currently approved NetEA variant which is basically just gaurd with some chaos symbols painted on the side.

So 3 units of RA4+ Fearless macro toting wraiths to deal with, in this game the blades were in the vampire and the gaurd in the storm serpents. Revenant titans providing massive fire support and the wraithship dropping double pie plates of death just to cause some dramas during deployment really.

The Lost and the Damned Redux


A bit of a mixed bag but the basic principle is that you have two fast moving cultist formations who can summon daemons to support their assaults across the board and a third one held back as a blitzgaurd. Fire support comes from the plague towers who can do good damage to infantry and light vehicles with their BP barrage and the Hellfire cannons which offer long range macro battlecannon death. Two sets of planes gives the army the capasity to strike all over the place and the Doomwings are also a solid figher option to buff the quite depressing ground based AA options. 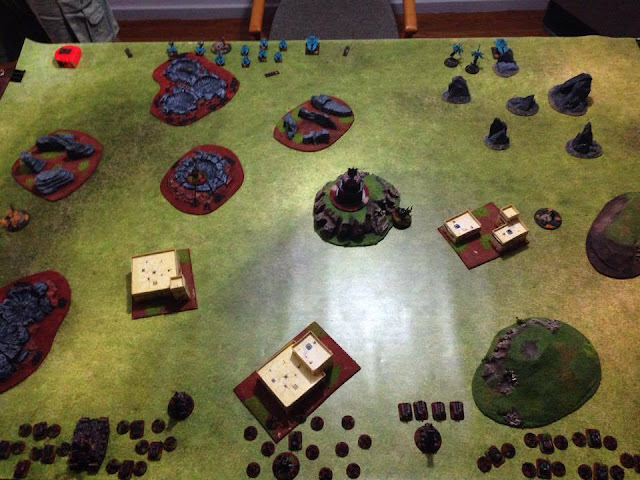 Deployment
I'll confess to not having a solid plan for this one. My build essentially works on the idea of getting solid fire support from the plague towers and hell cannons, doing some distracting with the zombies and taking ground with the cultist units. Like all the best plans this one lasted until the first shot...
The cult was spread from one end of the table to the other with a fairly symmetrical allocation of cultists, hellcanons and plague towers. The BTS cultist unit is the blob with an altar on my left. Opposing it the eldar have grouped up around their blitz and with a clear flanking force of revenants and storm serpent. 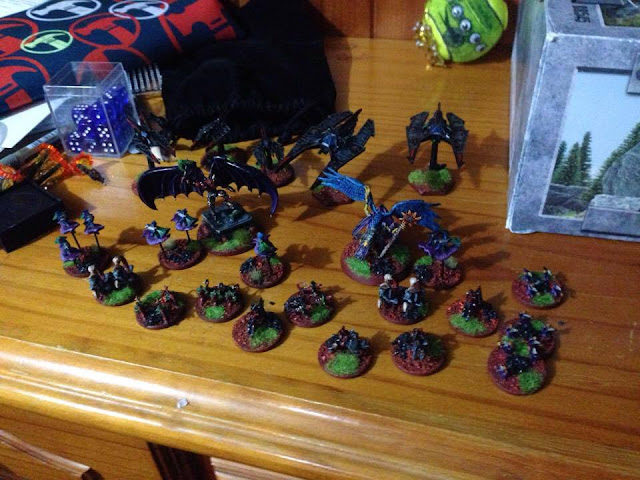 Waiting to be summoned in one form or another... The lesser daemons would be waiting a while!

Turn 1
Turn 1 starts very cagey, not confident of a good position the plague zombies stay in hiding and much of the Iyanden force is still holding off in the warp. In hindsight keeping the zombies in reserve feels like a mistake and I should have dropped them turn 1.
Iyanden win initiative and start with a Dragon ship killing a land transport and an infantryman from the BTS cultists followed by a few more casualties from the night spinners as I advanced.
The hellcannons on the left decided to advance through terrain to take revenge on said voidspinners... 3 of them didn't survive the trip and the last one missed... My leftmost plague tower advanced only to have 5DC stripped by the revenants who doubled to light it up... so far not so good!
Adding insult to injury a huge assault goes off on the cultists on my right who had advanced. A broken storm serpent delivered a unit of wraithgaurd who prepped the cultists ready for an air assault from the wraithblades which wiped the cultist unit out. The only redemption was the firestorm bombers sniping out the transport afterwards. What a mess. 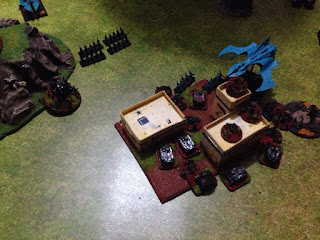 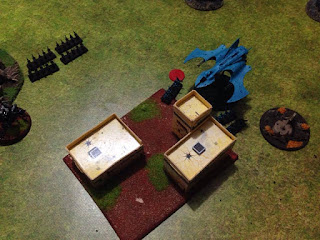 This is a textbook example of a great engagment... pity it wasn't me attacking!

Turn 2
Plague zombies come down to surround the revenants and be annoying and potentially attack the scouts near the Eldar BTS. Sadly it wasn't to be as eldar once again stole the initiative. The plague zombies surrounding the revenants were quickly cut down and broken by the wraithgaurd and rangers but being fearless they planted themselves in and prepared to be as annoying as possible 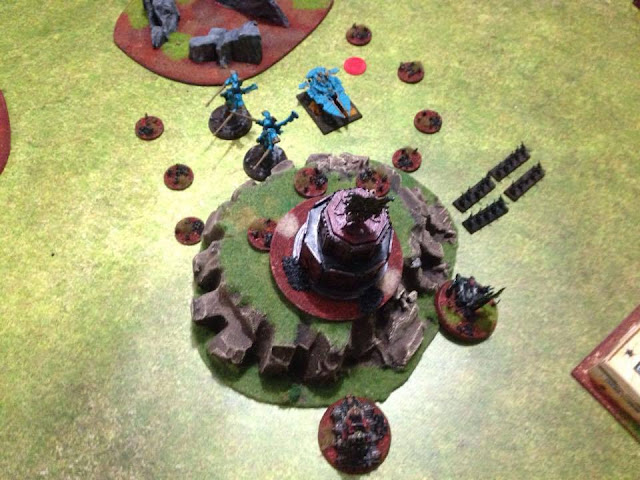 In response the BTS cultist formation summons a lord of change who snipes out the middle storm serpent with its double macro shots. The plague zombies near the Eldar BTS happily engaged and wiped out the Eldar rangers in an impressive display of competitive brain eating.
Eldar Falcons zoom up and snipe the alter out of the BTS formation which gets sucked back into the warp on a crit followed by a retain with the sup com wraithgaurd formation emerging from the webway to challenge the lord of change to single combat, amazingly he survived it and the broken wraithgaurd fall back to a safer position.
Turn 3
Avatar pops up next to my cultist formation, Eldar win the strategy roll, only to fail to activate the wraithblades... twice. Sad day for the Eldar.
Plague tower siezes the opportunity to break the storm serpent in the middle and then a retain sees the right most cultists summon a bloodthirster and head straight for the revenant Titans. After 2 epic rounds of combat a revenant lay smoking but the cultists lost their nerve and fled.
The remaining wraithgaurd sustain on the plague tower taking it down to 3 wounds and the avatar follows up for an engagement reducing it to a single wound and broken.
I saw an opportunity to run for the enemy blitz and secure a win but a tragic 3/4 failed rolls for activation robbed me of my opportunity and we set up for turn 4....
After rally phase there's not a lot on the table, it's a plague tower, 2 sets of planes, 1 cultist unit and some plague zombies versus a storm serpent, 4 wraith guard and 3 wraith blades.... 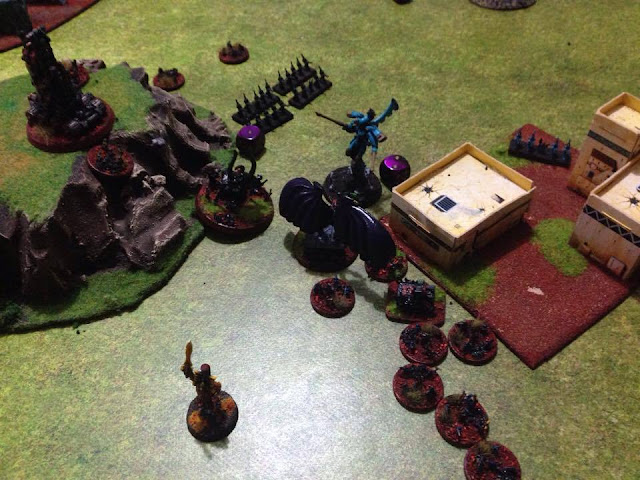 Turn 4
Eldar win the final initiative bid of the game and move in for the kill on the plague tower
Wraithblades clear the zombies and and the wraithgaurd bring down the tower with massed fire.
Bombers and fighters both fail to activate, one with a sup com so it comes to the zombies to clear the void spinners off the enemy blitz which they do! The win then comes down to the BTS cultist unit walking up to the uncontested enemy blitz.... guess what....
So net result was a VP count back and a score of
Eldar kill - 1385 Cultists kill - 1205 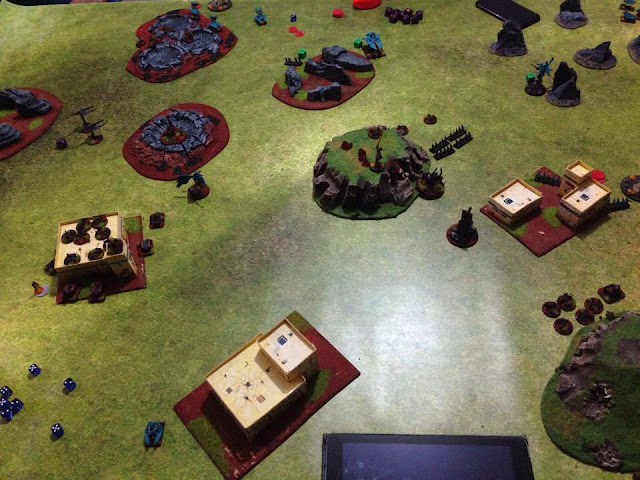 Conclusions
A damn close game which the cult could have taken out if not for some nuts failed activations in the last turn or 2. Most of the remaining Iyanden troops were broken but those wraith constructs are damn hard to finish off. Not a bad first go for the cult. Things I learnt this game:
Hellcannons are damn fragile... and clearly a massive target.
Cultists are good fodder but don't expect anything much else.
Plague towers are really good for all round FF support and flexibility but again a big target and they can't respond well to the big stuff which will be hitting them.
Bombers and planes are both good options... when they turn up!
I expected the bloodthirster to be the man of the match but since he doesn't do much when not in BC my final conclusion was that the Lord of Change was much more useful overall.
Plague zombies are great, such a pain for the enemy to deal with even if they will never actually achieve much else.
Lesser daemons - funnily I never summoned even one despite having invested in a bunch of them. I really need to work out how to use them or just drop them altogether for something else.
Posted by Unknown at 20:08:00