So it's been a month of furious painting, time to see how our crew are faring with their projects.

Player 1 - Steve 'The D6 Addict' Gibb
This month for me was all about Daemons. Well actually that's a lie. I got too excited and finished the entire army... but I did the daemons first so let's just pretend I followed the rules! That said I've been super impressed by the quality and dedication of the guys who've volunteered for slow grow duty. There's more players on this list than in my entire local gaming scene and it's brilliant to see so much energy being poured into our system. It's also amazing to see just how much quality people can produce! I've posted up my first game with LATD as a report last month which was a seriously narrow loss... Back to the drawing board! Cancon is coming! 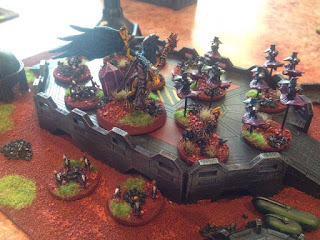 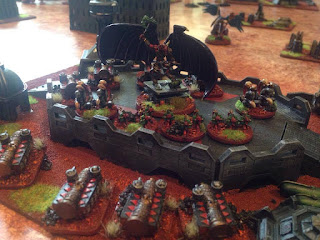 Month 1 Now as I already had all of my 3000 points I didn't need to rush out and buy anything This however does not mean I rushed into painting. The modelling painting aspect of the hobby is by far my least favourite. Over the last 3 Sunday's though I did get into a bit of a groove and churn through some painting. But in typical #zacmanning style everything is 3/4 finished and I have close to 2000 points if not more at this stage.
I managed to base coat and add details and washes to all of my wraiths and tanks. I just need to add gem colours and touch ups and they are finished. Basing however will be a while as I am waiting materials to come in stock so I can purchase. I will be going for a light grey weathers cobblestone look which should match well with the Orange and Blue.
Now as for game play I managed two games of 3000 point proxy hammer with my list. I managed a resounding loss against John and his baron siege horde and a very close win (basically draw) against Steve and his lost and dammed (renamed to lost and dammit why can't I activate a unit) I have a lot to learn with using this army and many more games are required to gain basic mastery of the list. I am ready for the challenge and the ridicule of playing the pointy ear gits 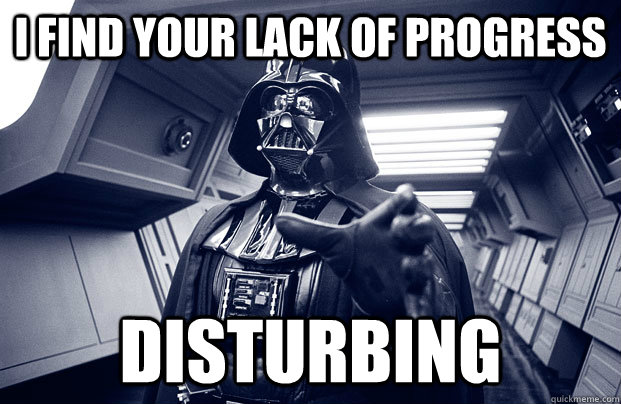 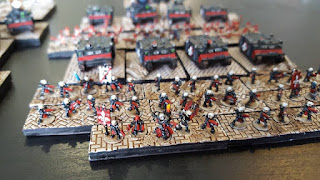 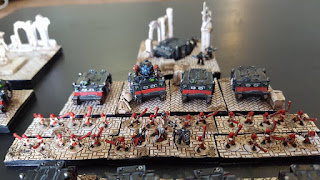 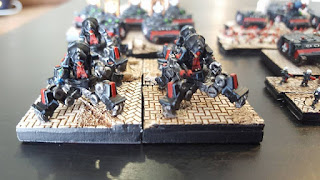 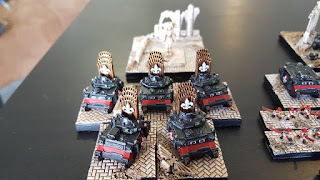 So one month down and though I've completed my first 1k, I've not yet been able to have a game with them. Hopefully I should be able to fix that issue in the coming weeks 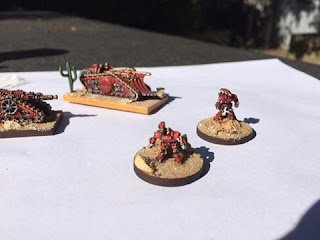 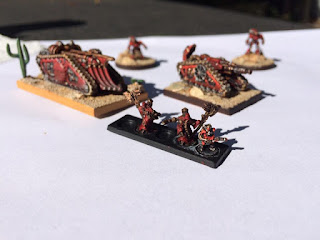 I hang my head in shame that I'm behind a little on my slow grow painting. Ended up disliking my first color scheme and having to strip and redo. Really loving the new concept of red, brass and desert bases. I'm at least able to offer for you guys photos of one completed test model from each type

Game wise I did get a 1000pt minigeddon match in against Adam's Eldar. It made me realize just how much of a beast the core admech formations are. 8 Skitarri + 2 terminators + 10 Chimedons is an awful lot of 5+ bodies to throw into a firefight. I'd even trust them up against most of the 40k core formations out there. 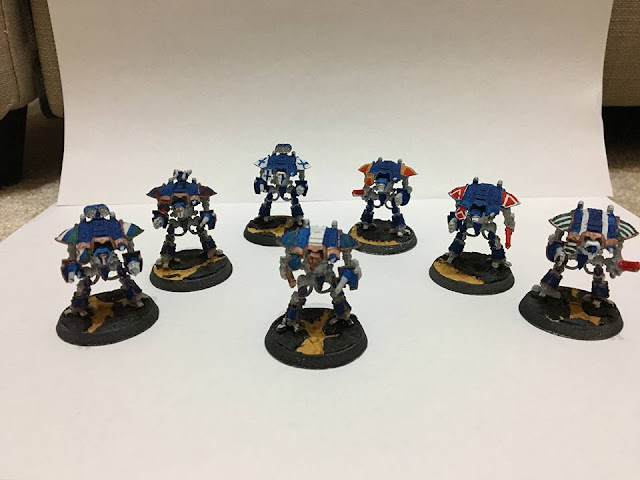 As you can see in the pictures, I plan to give each Knight his/her own heraldry, unified by a deep blue main colour and bare adamantine body. That is currently flat mithril silver, but it will get a generous black wash/quickshade to dull it down and make it look less clean, as well as bring out the detail.

The color scheme is based on very similar color choices on my warhound and thunderbolts in my Codex Space Marine army, so I'm confident it will look OK in the end. I need to buy a brighter yellow paint for the heraldry and lava, what I have used will be way too dull under the quickshade.

Despite the rocky start I am fairly happy with how the painting is going - I will get a nice contrast to help my Knights stand out from their bases, which in 6mm scale is really important.

This is a Regimental HQ with Commissar, and 3 Baneblades (one with black markings which can be used to represent the Commissar tank). These guyswere a bit rushed, and if I have time I may go back and add symbols to the Commissar Baneblade, markings to the army designation stripes (not visible in this pic) and an aerial to one Chimera (to represent the SC's Chimera).
Next month I'll be working on an Infantry Platoon, 3 Shadowswords and 3 Manticores. There's a reasonable chance I won't manage to find the time during this month, but we'll see. 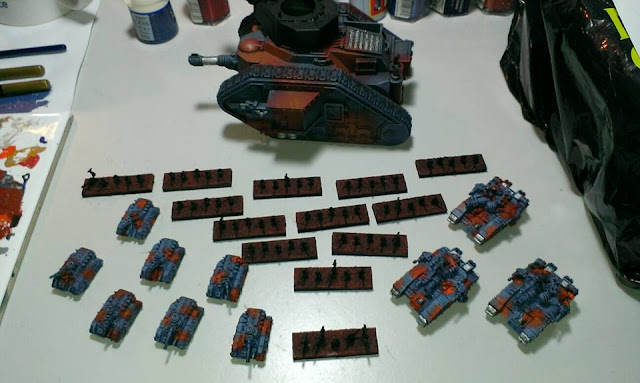 When I started assembling the Guard, I decided I wanted to go with something a bit different for painting from the standard Steel Legion look. Many years ago I had worked on a tank company army for 40K, using a “plasma storm” camo pattern. Unfortunately, that was two, if not three iterations of the GW paint range ago. I’d also sold off almost all the army over the years, and copies of the reference material I’d printed was long gone (as was the IG camo reference from the old GW site). All I had left was one unfinished Russ… Unwilling to take the sensible option, I dug through the paint box and managed to unearth a few pots of “near enough”, and “pretty sure this was it”. I savaged an old brush to make an Epic scale stippling tool for the plasma bursts, and I was off. Just not very quickly. Unfortunately, my chosen 1000 points is sadly lacking in detail work (and the infantry looks suspiciously like black undercoat). So I’ve got a bit of extra work ahead of me this month to complete the next 1000 before coming back to bring this lot up to speed. Not surprisingly, they haven’t had time to take to the field for some slow-grow gaming either. Maybe next month? 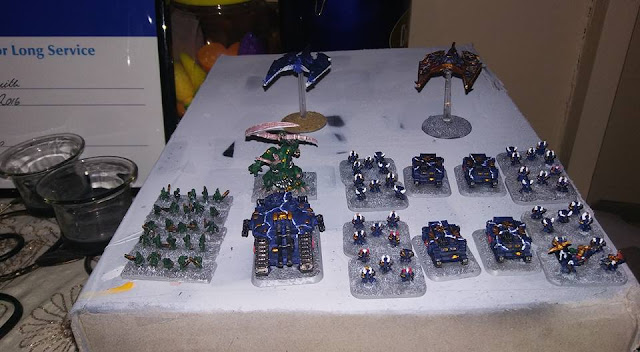 Month 1 is done, I didn’t quite make it as I have 1 flyer left to do, just a bit more for month 2.
But I enjoyed painting Night Lords and I am happy with how the lightning showed up, I did manage 2 minigeddon games, one against Adam which was a loss and one against Kendall which ended up in a win.

Well at least it's still better than Zac Manning! 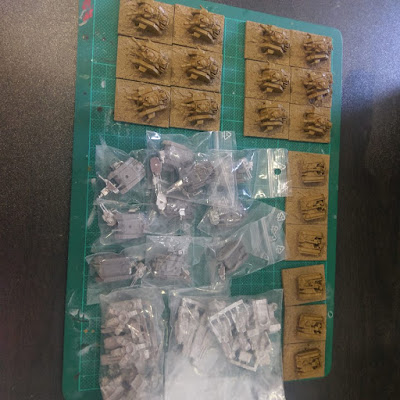 Player 10 - Ben "I need a reason to paint" Wadswoorth


Tau are looking happier this month, a few new additions, a few more coats of white, and rails & exhausts powering up. Still a couple layers of highlights and basing to go, but happy so far 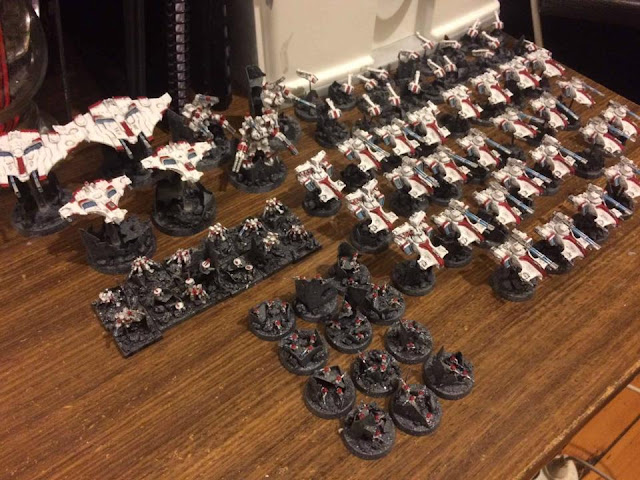 So month 1 is over. I am woefully behind schedule, thanks to a mixture of work commitments. None-the-less, I got a bit done and am happy with what I have painted, so I'll post up the WIPs of the models that are underway. 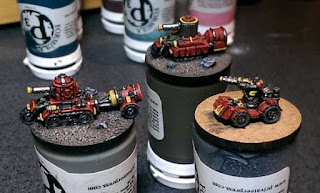 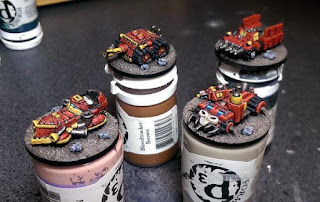 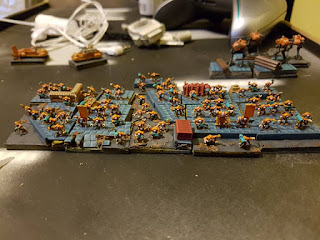 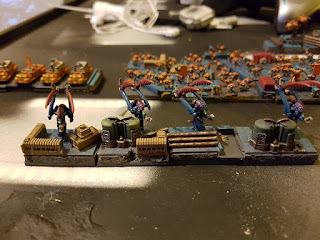 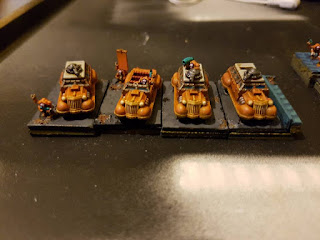 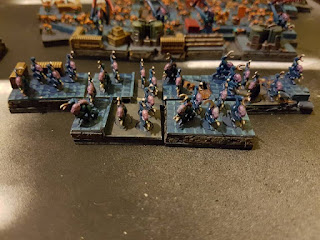 1 month down and too many hours!
This first thousand have been a learning experience.
The Painting -
As you can see, the primary colour for this army is a bright orange. The lion share of the models were sprayed with Vallego model air Orange over their grey base coat - a couple coats were required. A quick wash and a highlight finished it up.
Their jump suits are stone gray with skull white highlight.
Finally the weapons were painted jade and highlighted.

The stealers and Lictors are reflection of their 2nd ed colours, unfortunately blending into their bases, but I figure if anyone had a camoflage it would be the nids who've infiltrated the hive world.
Finally the bases were base coated midnight blue with a couple highlights of severly watered down Troll Blood Flesh. A final edge highlight and a quick wash of black washalong the cracks and hey presto - a month of my life!
Gaming -
I've gotten a few games in so far with little success.
Though I've outnumbered/out activated my opponents, my army has far less resilience.
A little disappointing, but I reckon they'll be golden with their next month of additions.
November's Build -


I'll be adding a formation of baneblades, 2 formations of brood brothers and some hydra tanks