Games club Sunday so I thought it might be a good opportunity to test out one of the builds I was thinking for Cancon 2017, Baran Siegemasters.

The basic plan is to hold ground and use the arty and shadowswords to pick off support formations while the troopers, ragnaroks and scout tanks advance forwards to tackle engagements and take ground.
*note* white paper represents a set of trenches and gun emplacements this game because I forgot mine... not that they get used anyway for the most part.


My opponent today would be John running Cadian's, bringing us to a total of 31 activations on the board today...

SENTINEL SQUADRON [125]
6 Cadian Sentinels
Setup
One big problem we both encountered was the pure scale of our armies needing every inch of space to deploy, especially with plenty of blast templates in each army. Cadians solved this problem by garrisoning a chunk of their forces into forward positions. Baran solved it by standing on each others shoulders and generally just filling up the whole deployment zone. 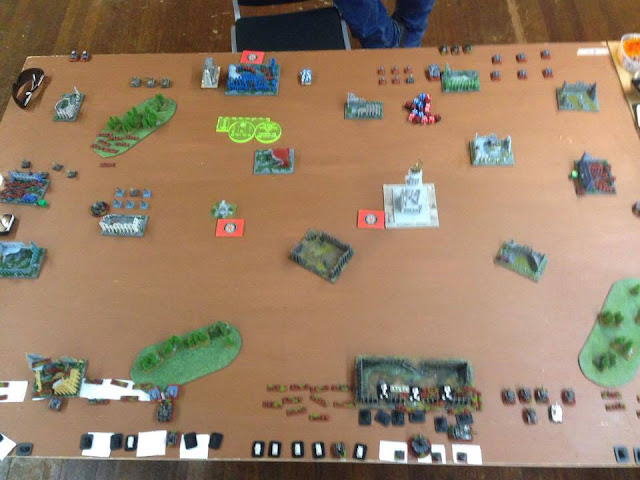 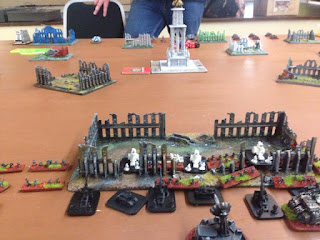 Manticores fail initiative twice lol
Baran artillery is better trained and manages to fire and kill a deastrike and break them.
Come cadian sentinels advance but this was a background to the shadwosword duel as the baran shadowsword advances to alphastike the cadian equivalent. Baran missed, cadians didn't. Booo

Positioning war continues through the middle of the turn as both sides advance to grab the scattered terrain options.

My shadowsword manages to break its opponent but I was still losing the big war engine duel.

The right flank heated up (literally) towards the end of the turn as the hellhounds doubled up and burned the baran infantry out of the forest (photo). I attempted to respond using a ragnarok tanks and an engage with the scouts but sadly the ragnarok hits all bounced and the scout tanks were overcome by the superior cadian FF values, denying the ragnarok supporting fire. Right flank looking bad. 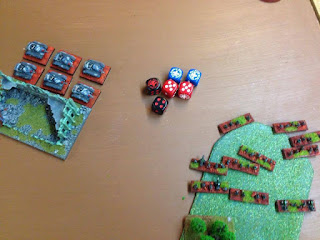 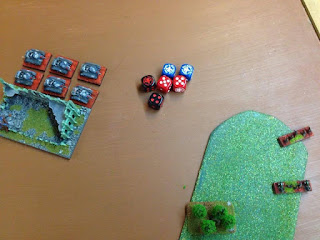 Rally phase. Everything except for the crispy baran infantry survivors and the cadian deathstrikes rally so turn 2 is going to be huge

Baran Left, Centre and what's left of the right flank

Turn 2
Cadians win again and fire the manticores. They failed to activate again but the sup com got them in line with threats or promises. Probably threats. They make themselves known dropping onto the baran BTS and killing a few but putting 9 blasties down whilst also suppressing all the guns In the central artillery unit.

Cadian shadowsword ends the duel definitively with my shadowsword blowing up spectacularly.

My attempt to revenge myself on the hellhounds ended poorly with the ragnaroks again not managing to kill a single flame tank and the scout tanks being wiped out by 3 hellhounds in FF. The right flank is now basically a write off. Bugger. Let's focus on the centre.

Actually I decide the next side will be the left where I picked off some karskin sitting in  ruins and follow up with a clipping assault with scout tanks... yeah that didn't work so well.

Cadians decide to fight in the centre with hydras prepping the baran infantry in the ruins killing 3 despite the ruins. The surviving infantry put a blast marker on the sentinels behind the statue to make an engagement more tricky for them.

The left flank begins to crumble as first karskin and then sentinels engage and push my baran infantry out of their forward positions. Ragnarok tanks responded by pushing out the sentinels but I couldn't wipe them out because they had a commissar.

In the centre the command leviathan grinds forwards forewards and melts a ragnarok on my left flank. Whilst my scout tanks managed to engage a unit of hydras off the board, truly the stuff of legends. Sadly it wasn't to last as the scout tanks were melted shortly afterwards by those pesky hellhounds who sustained.

The rest of the turn for baran was just trying to clear blast markers accrued earlier, though my artillery did manage to cover the entire hellhound formation with a template and actually kill one!

Cadians are in firm control of all the central objectives

Rally phase - Everything cadian rallied or clear blast markers, with the deathstrikes coming back in time to shoot at nothing useful next turn.

Most of the baran stuff came back too except for a unit of scout tanks but sadly both ragnarok units are engage bait carrying a single blastie each.

Turn 3
Cadians win initiate again... no surprise given they have the plus 1 start rating but it still hurts!

Cadians initiate operation mop up (photo) surrounding the Ragnaroks. And engaging with those damn hellhounds. 10 hits from hellhounds and supporting karskin sees 3 dead ragnaroks and losing combat by 8 sees off the rest of them! 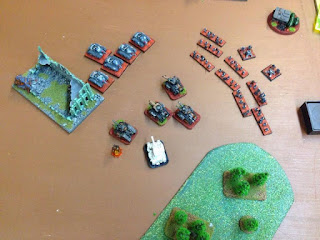 The left flank will see my ragnaroks attempting to clear some karskin out of the ruins but they lose the engage and roll a double 1 so they are wiped from the board.

The rest of the turn is fairly one sided... manticores rain blast markers down onto the baran HQ. Whilst Baran artillery takes out the manticores in return, morale victory.

Cadian command leviathan continued to roll forward this time engaging the remaining baran infantry contesting the central objective. The rest of the turn goes the same way. Cadians grind slowly forward removing everything baran that is holding an objective leaving the baran largely in their own deployment zone. 3-0 to the cadians who couldn't kill the BTS or take the Blitz.

Overall thoughts -
Cadians are a solid list but the baran plan just didn't come together.  I knew this would be all about engagement and my theory was that the scout tank formations would be solid engage troops with FF support, it just didn't happen. They tended to melt too quickly before the support ire could make a difference. Being down on WE for that duel was also a big problem and when the cadians kept hitting home and one shotting my shadowswords it just wasn't going to happen, interestingly too the deathstrikes never even got to contribute to that.

For the cadians it was just a slow grind with a clear focus on the important objectives. They garrisoned around key points and never let them go. In the end their superior armour and solid FF options were just too much for the baran to chew through. Those hellhounds were amazing too, I've looked at them myself but never actually used them and I found them really flexible and a solid support unit for the infantry based cadians. I'd consider 2 units but they are still pricey.