Now I know what you’re thinking, what’s this shit and where is my Epic Armageddon! But like many players I actually play multiple game systems and Star Wars armada is one of my absolute favourites so I’m going to write a series of articles which I’m calling ‘field tests’. The basic premise of these reports will be that I’m trying out new builds post the regionals season and exploring some different ideas. I’ll post the list and the general idea/plan of the list before each report and ask my opponent to do the same. You can then see whether or not the plan worked out as it was supposed to or fall completely apart as tends to happen. I think its always interesting when you think you have a totally awesome combination on paper but then you pop it onto the table and work out it just doesn’t work as you thought it would.

The forces of the legitimate government 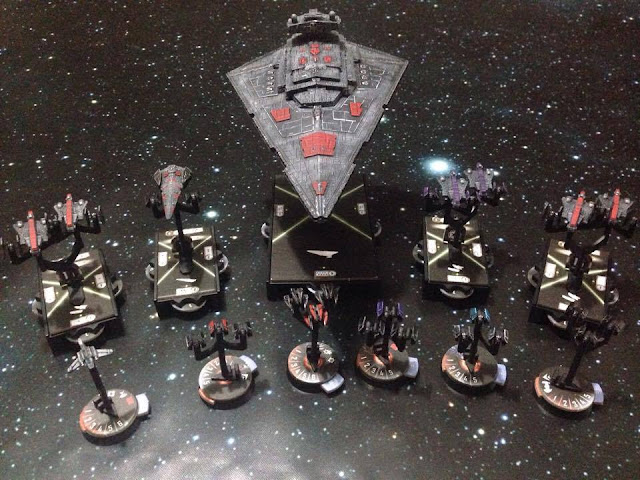 The basic premise of this build is to form up around the ISD. The suppressor Gozanti is to sit close to the ISD and supress enemy ships as they approach to ensure that Avenger gets maximum usage of its abilities. The ECM on suppressor means it has a higher chance of surviving in that horrible death zone between my ISD and its target which would normally be very unhealthy for a Gozanti.
The squadron ball is also designed to shelter under the protection of either the raider or the ISD but has been selected for maximum flexibility. With Rhymer in there its easy enough to threaten targets and soften a few ships up prior to the ISD hammer time but there’s enough anti-squad shots to give most enemy balls a headache too. The shuttle means that my other two Gozantis can pump squadron activations through from anywhere on the board helping to reduce some of the clutter around the ISD. The raider is super flexible, in theory its there for squadron support but it’s not against zooming forwards to put some serious threat on a target or go for a transport either, flexible but fragile sums up this guy. 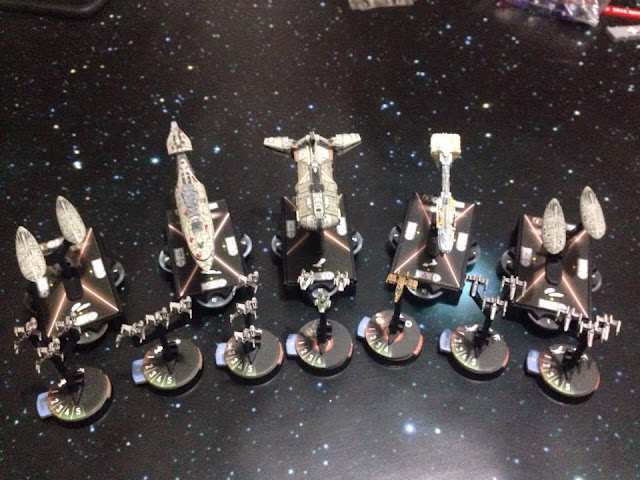 Bidding: Neither side had a bid so a roll off gave Imperials first turn and they would choose Most Wanted as the mission. The targets would be the Imperial  ISD vs Torryn Farr’s transport 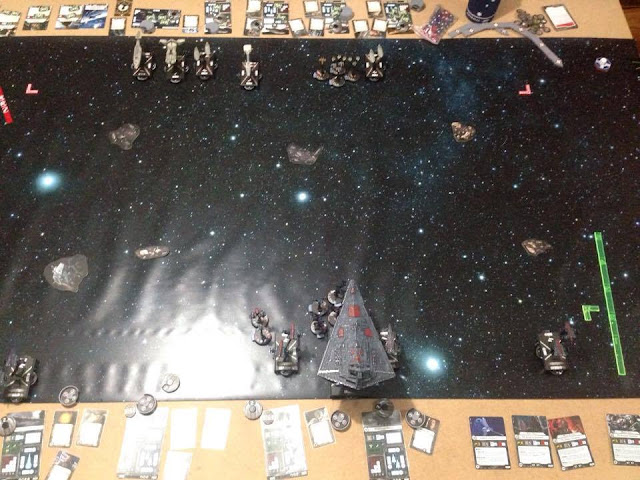 As I mentioned in the plan above my deployment would be all about castling up around the ISD and letting it do the heavy lifting, suppressor is the gozanti on the left whilst the comms net is on the right and Motti himself is on the extreme left preparing for a tour of the sectors station and asteroid options.

Turn 1
Cautious advance on both sides with a general speed 2 advance from most ships whilst the ISD slows to 1 aiming to keep the enemy ships within arc as best as possible, also it hasn't decided where to commit for maximum carnage.
Rebels have a solid battle line of advance, we will see how long it lasts once the proverbial hits the fan. 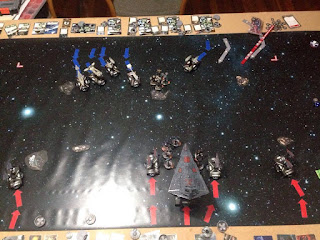 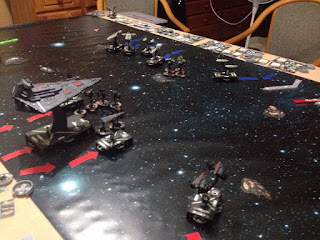 Note: At this point it's worth explaining the big red arrows... These are the best way I can think of to illustrate movement during the turn. The number of arrows represent speed e.g. ISD went 1 and their position gives you an idea of movement path. So in this case the ISD went 1 straight ahead and the raider did a jink to the right at speed two in order to give the big boy some more room.

Turn 2
A more aggressive advance sees the mc30 finish in range of suppressor and some really wierd positioning occurring on the imperial side. Currently it looks like a complete mess to counter the delicate manoeuvres of the imperials. Surely this must be a ruse...

Little happens for most of the turn, the ISD and some bombers take a few shields off the mc30 but little else of consequence happens until the end of the turn when yavaris advance. Some really ordinary red dice shots limited any significant damage occurring but it launches 2 awings after moving (flight commander) to tie down my remaining squadrons  taking two hits off Darth. 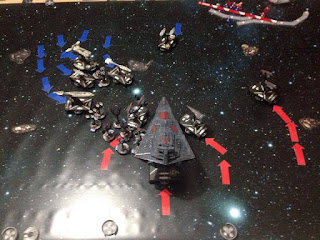 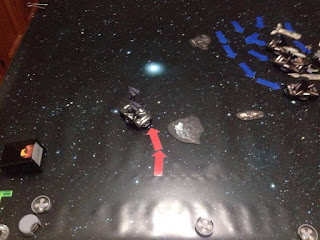 That MC30 has black dice range to supressor but only one arc so next turn is going to be interesting because basically everything is within red dice range of the ISD but sadly the MC30 is about 2mm out of blue dice range. Motti in his lifeboat is happily waving out the window as the rebel fleet passes by knowing that the shuttle allows him to still be relevant.

Turn 3
Lots of things are threatening lots of other things right now and it's really scary if you are a transport.  That said the transport holds tough and Motti activates first sending two squadron orders through the shuttle relay to order Martek and the shuttle to bomb another 2 shields off the mc30 which is now looking decidedly thin.
There is much consternation on the rebel side deciding what order to do things, a mistake at this point would be horrendous. Dodonnas transport would decide to go first but ultimately do nothing but deliberately crash to avoid moving forwards. The imperial gozanti on the right would follow, banking a Nav command and doing little else. Torryn would sneak forwards only to be countered by a raider moving into position for a big hit next turn. Now the big ones come...
Yavaris would lead the opening of real hostilities making both a-wing characters double attack killing earth Vader and an x-wing would zoom in for a single hit. Yavaris flak would take a hit off rhymer but little else. It's front volley would cause suppressor to use its scatter token, time to move little gozanti! Yavaris ramming the raider would finish the deadly activation.
Suppressor would snipe another shield off the mc30 and force torryns transport to burn its scatter with 2 hits (most wanted) before sneaking into the tiniest of gaps next to yavaris ensuring its survival against the mc30.
The Rebel Pelta pushed forwards for the next activation doing little with its guns due to more ordinary dice (so many accuracies and blanks so far tonight. It would move forwards but do little else, the launch bays glowing ominously.
The ISD represents the final shot for the imperials starting with 6 damage on yavaris (medium) thanks to no brace or evade options and 4 on the mc30 (boom) thanks to avenger meaning it couldn't use any of its 4 exhausted defence tokens. Ouch rebels.
Squadrons would see the imperials pinned by rebel a wing characters and refusing to shoot in order to avoid the nasty counters. 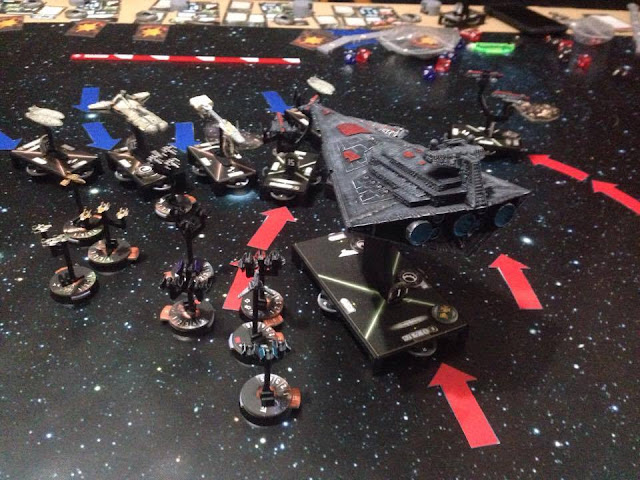 End of Turn 3 and everything is brutally close. The ISD is unscathed though and Yavaris is down to 2 hull against the ISD that could go first. Damn unsafe positioning. The A-wing characters though are tying up the outside of my squadron ball easily because I lack the critical hitting capacity to get through their scatter tokens without taking too much damage from counter. Currently it's a losing situation for the imp squadrons.

Turn 4
Imperials kick off with the raider opening up on the most wanted torryn Farr who evaporated to a powerful short range side shot thanks to no evade token. Quickly followed by yavaris which would succumb to a short range volley from the front guns doing 3 damage (brace to 2) which finished it off. Imperials are surging ahead now thanks to the power of first turn.
The rebel pelta would seek revenge on the suppressor gozanti who has earned the shit out its points this game. A side and front volley would see the scatter token disappear leaving him feeling very vulnerable followed by a speed 2 advance, drop off 3 b-wings from the rapid launch bays which wreck the poor ol suppressor and the 3rd takes 2 shields off the ISD.
Imperials would now take their time with the major threats removed. Motti would order the shuttle and zertik to plink a couple of hits off the x-wing who was boosted by Jans brace being used to protect him. The gozanti on the right would chuck a concentrate fire token over to the ISD and move up.
My ISD would announce its presence with a point blank volley on Dodonna reducing his space dust to space dust... Then it decided to drop to speed zero in order to avoid crushing enemy squadrons and hopefully getting some more solid anti squad shots off. Don't be fooled though this wasn't a normal sort of move, I knew I would cop serious damage as a result but ultimately a full ISD takes a stupid amount of punishment before anything bad happens.
In the squadron phase Martek and tempest would team up to finish off the x-wing and rhymer would plink a hit off Jan ors only to take one in return. 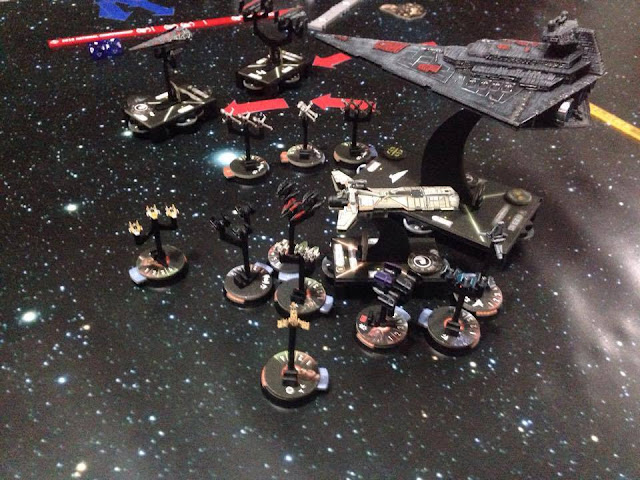 Rebel ships are squishy... but the engine techs on the pelta have kept it just out of the front arc so it won't be going down. Squadron phase is starting to balance out as the ISD brings in the flak but sadly the raider is just too far away to hit the full ball with its damage.

Turn 5
Raider with flechettes opens up on two b-wings in range activating both with crits and doing some damage as well.
Rebel pelta activates squadrons using tycho to kill tempest squadron, a b-wing to bomb the ISD for 2 damage and Jan doing another hit onto rhymer. It's double ark shooting would do reasonable damage thanks to the speed 0 meaning no tokens could be spent, in the end it was 3 shields and 5 hull points down. Motti ISD shrugs it off.
With the rebels out of activations it's all over to the imperials now. It's not a question of who will win but s race to see how much I could kill before they escaped at the end of turn 6.
ISD would open up with much flak forcing the awing characters to use their scatter tokens and taking a few hits here and there.
Motti order two imp squadrons to kill off Jan.
Gozanti on my right hands over a concentrate fire token to the ISD. 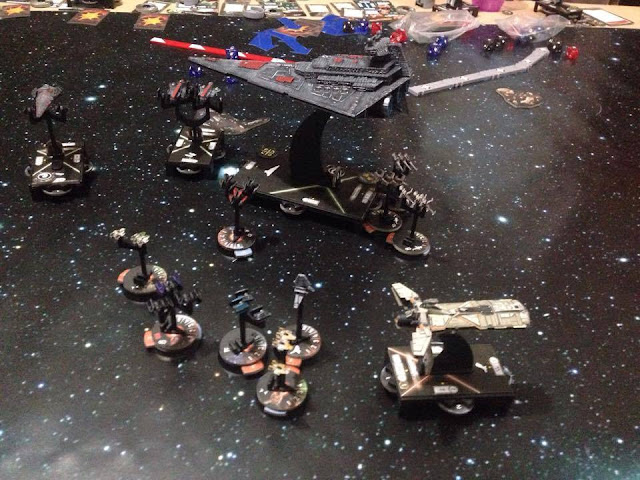 It's all about the squadrons now, the ships are largely passing in the night at this point and there's no objective points to be gained so the only way to affect the totals now will be to bring down the remaining squads. Sadly that raider is again a few milimetres away from being useful


Gozanti in the middle decides to get out of the ISD's way and orders rhymer to have one last volley at Shara before he died to the return fire.
Rebel pelta would order those pesky b-wings to continue to hurt my ISD which was no longer enjoying this getting shot at game. It's side guns would strip the remaining shields but it would survive the game in one piece.

The rest of the turn was largely mopping up, Martek would kill a b-wing and zertik would die to the combined efforts of the a-wing characters. 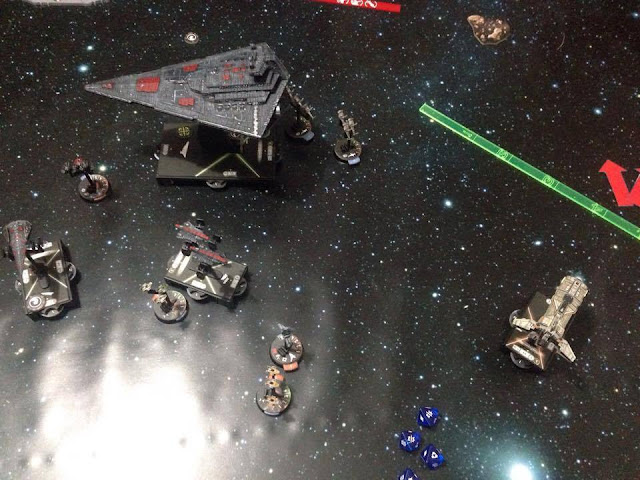 Final score would be rebels 101 and imperials 240 points including 18 bonus for the transport!
Posted by Unknown at 20:11:00