Backed into a corner? Show em your teeth!

Backed into a corner? Show em your teeth!
A strategic response to high strategy armies

One curse of being a low strat army is that when it comes to deployment you’re options are pretty limited. Playing for funsies games will mostly just be played straight across the board but it’s a sure sign of a competitive opponent if they actually choose to put you into a corner deployment. Why might they do this?

Advantages of putting your opponent in a corner?


1)      The most important reason that you’ve been put into a corner deployment is that your opponent is making it much harder for you to claim objectives, specifically the blitz which is now ridiculously far away. Additionally its much easier for your opponent to control a 3ft stretch of board than a 6ft one to keep you away from said objectives. This won’t be a problem for your high strat opponent because the high strat armies (Marines and Eldar) all have easy access to fast troops, air assault and teleport attacks. Corner deployment is a bad idea for Black Legion marines because they don’t have access to so many of those options.

2)      Death from space – Orbital bombardment is the other reason why you are likely being put into a corner. Again Eldar and marines will do this because they have easy access to 4BP orbital bombardments and that double template can be deadly as. By putting you into a corner they reduce your deployment zone making it easier to hit you. A common place to drop the barrage would actually be in the corner of the L somewhere because with the extra template it gives them heaps of flexibility though it’s largely guesswork. The best defence against bombardment is to hug cover, spread out and cross your fingers!

So how can you flip this around?

As I mentioned originally corner deployment is all about giving the high strat army an advantage, a favourite objective deployment from one of my regular opponents looks like this: 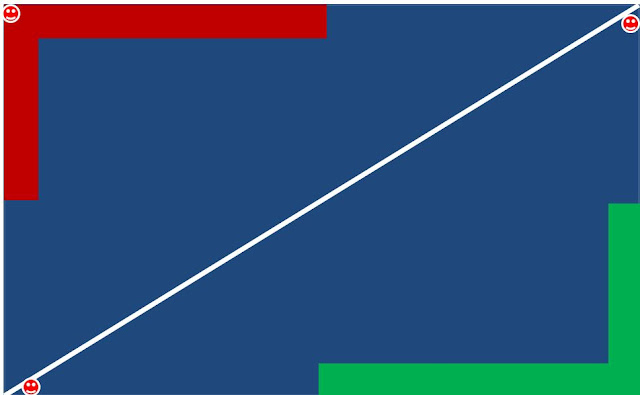 A high speed army can easily get to the two objectives on his own short edge which means the only hard objective to grab is the one closest to my deployment zone. My objectives would be forced somewhere into the middle meaning that for me to take them I would potentially be split in 3 directions whilst simultaneously trying to defend my blitz from whatever shenanigans my opponent has planned, and they will have a plan because they chose the objectives. It’s an awful scenario that puts all the advantages into the attackers hands.

Now here’s an alternative option.
Given the same objective placement try this method: 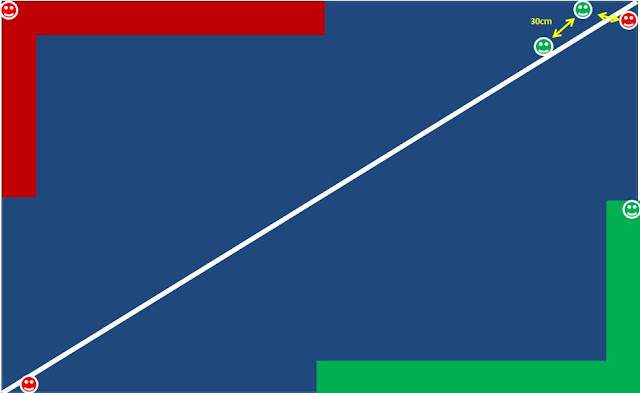 The advantage now is that you only need to control a relatively small amount of the battlefield to prevent your opponent taking your blitz and to give you 1VC for take and hold. You could then send out a second contingent to challenge other objectives as you like but you’ve reduced a 4 way situation to now a 2 way one. If your opponent doesn’t place their first objective in your upper corner that’s fine too, just deploy yours in that corner and now you have 2 objectives within 30cm of the short edge and 3 (including your blitz) within a 30x60cm box, easy to hold and easy to strike out from. If striking out isn’t easy for you it’s a solid position to force your opponent to react to, they won’t be able to get 2 points without taking one of those 3 objectives or your BTS so worst case scenario go for the points win, it’s still so much better than spreading out like your opponent wanted and getting picked off by fast moving marines. 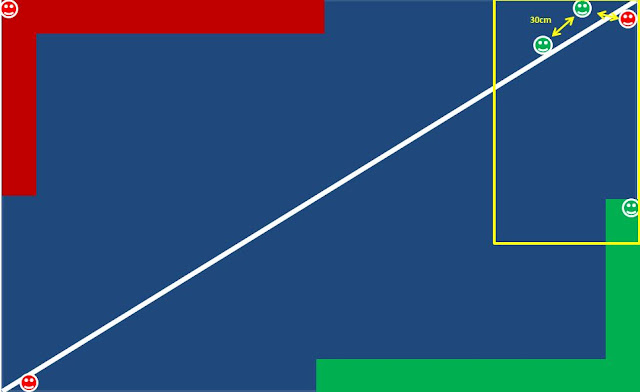 I’ve found most armies can fit comfortably in the short edge section of the deployment zone as well which gives you a very tight box to deploy, easy to defend from nasty air engagements. That said though if they happen to have a fat bombardment coming first you might need to spread out a bit more and just use march moves to get into better positions after the turn 1 bombardment.

Anyway give it a try next time some sneaky high strat sod pushes you into a corner and see how it goes, post your thoughts and experiences in the comment box. Hope you enjoyed my graphic design skills!