Thursday night would see an epic clash between giant god engines with Cadian's toting a Warlord Titan going up against a triple Gargant horde with all of their friends in tow. We thought this would be a great opportunity to field test a couple of developmental armies in new ways and test out some options that (for me at least) aren't commonly seen.

The Table
The table would be a blasted wasteland fitting for these giant death machines to fight over but with just enough area terrain that the gargants could use it stay at -1 to hit pretty much all game. 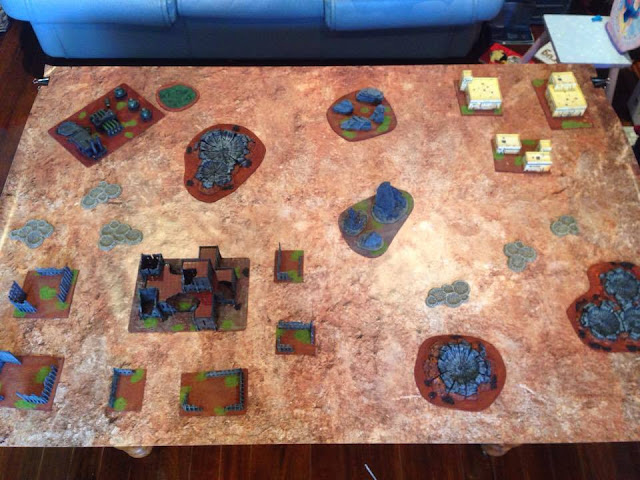 The Forces
Kendall would be bringing the pain tonight with giant ork death machines... 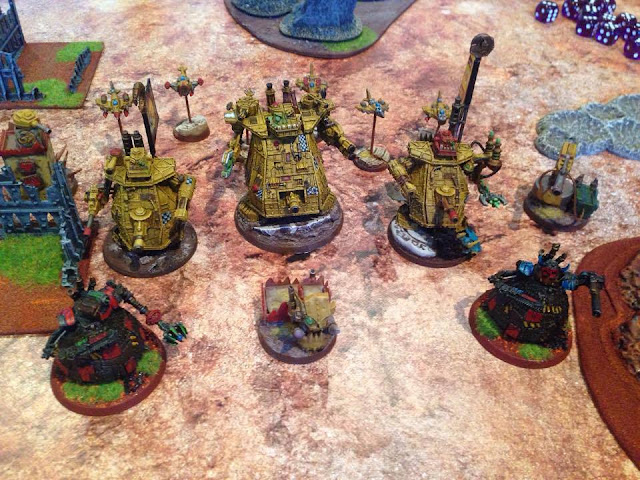 Opposing him for control of this pointless wasteland would be the brave Cadians commanded by me, in support of Warlordus Maximus 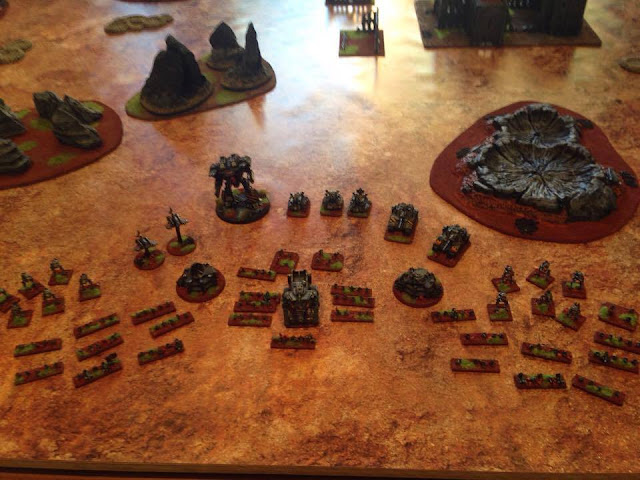 Deployment
With so few activations for the orks their deployment options are pretty simple - swarm the objectives and prepare to kill whoever comes near you!
The ork blitz was deployed fairly centrally on the far side (find the little ork buildings) whilst the Gaurd one is about 1/3 of the way along the board edge from the left with some infantry holding it. Most of the gaurd forces were in the other 2/3 of the table opposing the Gargants directly. 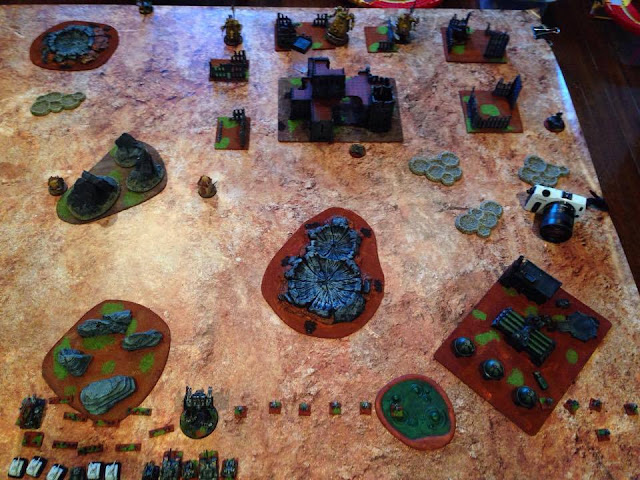 Slow start with planes going on cap to fend off the horde of orc fighter bombers circling the battlefield.
Ork response is brutal and swift with two grot rockets taking out a shadowsword from across the board.
Cadians shuffle around the board burning activations while the orks bring on fighta bombers to pick off some sentinels. Cadian cap kills a bomber but loses a thunderbolt in the exchange.
Gargants slowly advance onto objectives while some cheeky sentinels double up to ping a shield off a gargant, only to be broken in return.
The great gargant represents the final orc activation taking a fire to advance straight at the cadian warlord. He pings off a shield but both super zap guns went wide of the mark.
The warlord sustained as a response stripping all the shields off the great gargant but sadly his volcano cannon went wide too. The shadowsword hit home taking a DC off the Great Gargant. 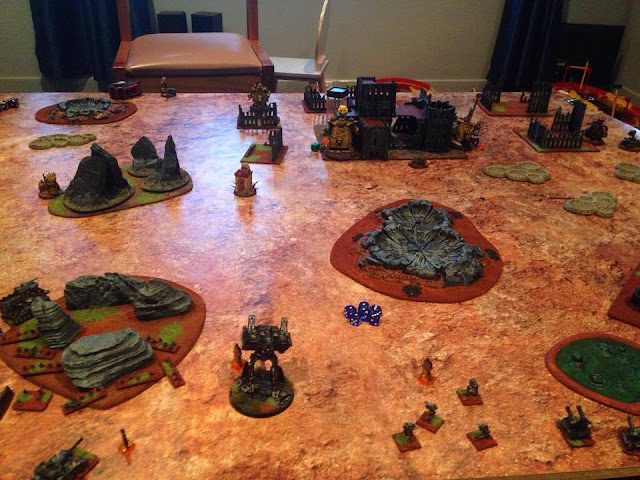 Great gargant sustains against the warlord stripping all of its shields and taking down one of its hull points. Ouch.
Fighter bombers retain, bombing the shadowsword for a blast marker.
Cadians scramble recharge the warlords shields marshalling it back to full and inflicting 3dc and a fire on the great gargant (7 to go) sadly this would leave the warlord a sitting (if heavily shielded) duck until the end of the turn.
Gargant no 2 (right) doubles up to blast the remaining shadowsword, it survives but is now broken... running low on Tk!
Cadians put planes on Cap to wait and see.
Supa stompa decides to press the advantage by doubling up and spraying plasma death over the hydras and a sentinel unit managing to fudge it completely but breaking the sentinels by default.
Hydras Marshall and ork planes fail to activate.
The second supa stompa doubles forward to strip 2 shields off the warlord and add more blast markers to the pile
With the orks out of activations the Cadian infantry storm forward along with hellhounds and the leviathan which strips the shields off the middle gargant. Next turn is going to be bloody.

Rally phase - the shadowsword rallies as does the sentinels but the hydras fail to gather their wits.
Sadly the great gargant crew put out both fires. 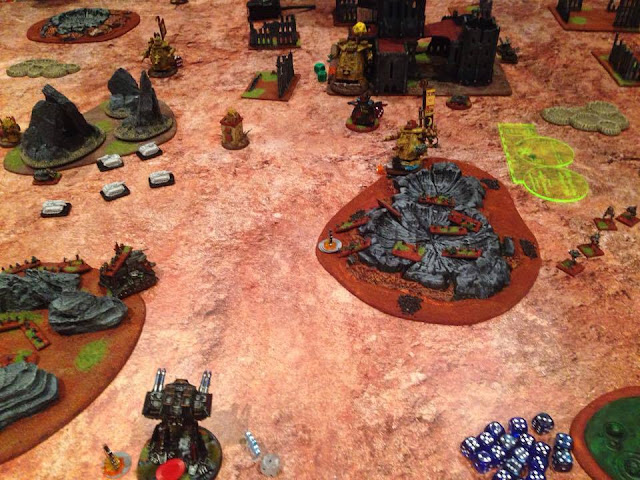 The roll off for strat was going to be huge and the cadians set a low bar at 2 only to be squashed by the gargants who went straight into it.
Gargant 1 (left) advanced to FF the hellhounds through the terrain, unsurprisingly the unit was quashed only to have the commissar zoom off towards the ork blitz!
Supa stompa retained for the engage on the cadian infantry in the middle who were crushed by the supporting fire from the central gargant.
Cadians finally get a go and both the shadowsword and warlord open up on the great gargant. Many many shots later, its down to a single DC... and it runs away behind the giant terrain piece in the middle of the table. No fires remain... Cadians are fleeing robbed.
Supa stompa Right stomped forward and took out a sentinel unit over 3 rounds of combat with the last one being slain by terrain as he fled.
Cadian leviathan fails to activate and just shoots some ineffective lascannon and macro shots into the middle supa stompa.
At this point we are pretty certain the gaurd can force a 4th if they can get someone into the enemy half.
Ork fighter bombers zoom in to deal with a sentinel unit that could make the enemy half, wiping them from the board.
The line thunderbolt pilot decides to be a hero and bomb the last DC off the GG, a hit went no but sadly the armour was still too tough.
Cadian blitzgaurd infantry triple forward to force the 4th turn
Final gargant centre sustains onto the warlord, stripping its shields and reducing it to 4dc with a leaky reactor....

Rally phase - planes fly off with no troubles. Commissar in hellhound fails to rally on the enemy blitz, damn that would have been annoying for the orks. 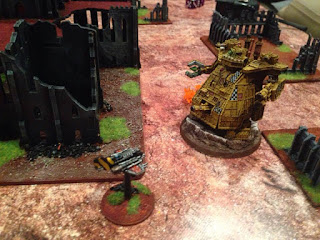 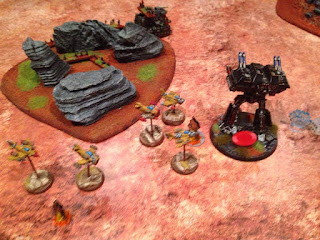 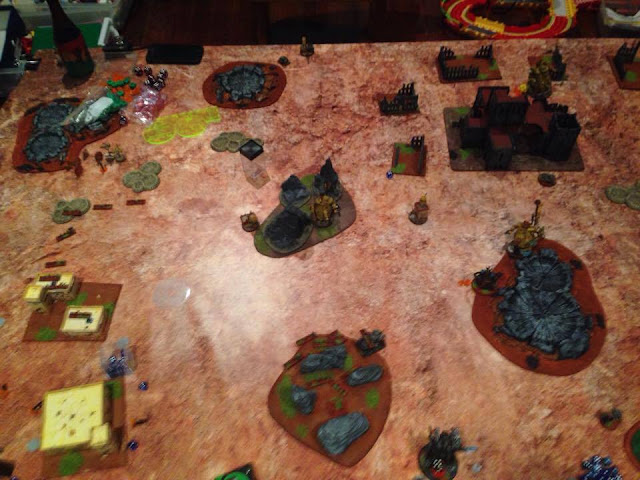 Turn 4
Cadians win initiative and the warlord takes the opportunity to Marshall... sadly it only manages a paltry 2 shields... it currently is looking at more TK D3 guns than it has  shields. It's shooting is also a big flop, missing with its volcano cannon again and only managing a single DC with its remaining guns.
Shadowsword retains doing 2 DC on the central supa stompa which is broken and runs after its Great Gargant cousin.
Orks initiate their cunning plan - shoot the big un with the supa stompa stripping 2 shields off the warlord.
Gargant left retains taking a single shot onto the warlord with its TK, dropping the last shield.
Cadian thunderbolt fails again to be the hero of the day and bounces off the GG
Double TK Gargant sustains onto the bleeding warlord who is reduced to a single DC and toppled by the mega lobba. The God machine falls.

The rest is just mopping up really, shots flying, planes falling from the sky etc. A brave unit of cadian infantry stop the gargants getting more than 1 VC (BTS) but they have a solid lead on points and win by a chunk. The only orc casualty was the fighter  bomber that was shot down in turn 1. The rest of the war engines limp home for repairs. 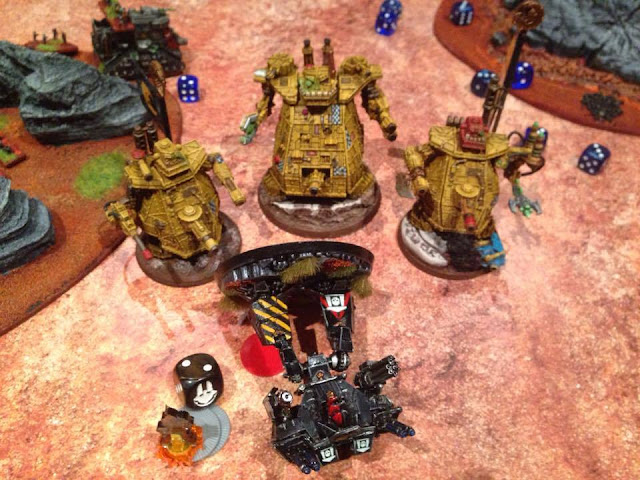 Thoughts on the development of the lists
I thought both sides were really good lists, this one could have easily gone either way with the cadians losing a huge strat roll off which cost them heaps and the Great Gargant getting super lucky in escaping on a single DC.

I was surprised that the supa stompas have been put up in points in the latest draft and can't imagine why that decision was made, on top of the auto fire for the extra movement and the totally useless AA I'm troubled with the continual need to nerf the gargant list. My gut says that the Gargants I was playing against 12 months ago were more balanced for the competitive environment than the current one that just seems to be fighting with one arm tied behind its back.

Cadians I feel are bang on, I've played with and against them in a variety of forms now and think they are a solid competitive build. Still a tier below Eldar because they lack flexibility and speed but definitely a tier above steel legion. I'd rate them as a similar power level to DKOK which is where you should be aiming these days IMO. Great stuff.

Hope you enjoyed the read, stay tuned for Cancon updates soon!
Posted by Unknown at 15:42:00