Slow grow? Bugger that, time for a speedy new army! 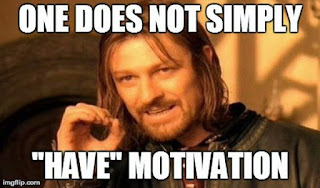 Sometimes when you need to paint a new army the right sort of motivation is required. Slow grow worked a treat for getting my Chaos Cultists painted up by my Tau have sadly sat in the box for more than a year without a lick of interest in getting painted.

In planning a list for Cancon this year I was super keen for Gaurd, Dkok specifically. I bounced around a bunch of ideas to find something competitive but I wasn't keen on running the feral orks again because I prefer to use different armies at each comp I go to. There is such an awesome range of armies out there and I have a pile of them ready to go so why run the same thing over again. The catch of course is that there is a clear pyramid of power associated with Epic armies and balance just isn't a thing, it's why I would run DKOK but never Steel Legion for example. I had also playtested Baran Siegemasters lists but just couldn't find something I liked.

So DKOK it was, I had a list all ready to go and I took it out for a few practice games. Sadly I ran into a super solid Eldar list which crushed it so badly I decided it just wouldn't be the best option for Cancon this year. The main problem with my DKOK build was that it lacked flexability so it was back to the drawing board. I wrote a few ork lists that I thought would be interesting but orks tend to fold fast against some armies and I reckoned it would be the same if I went back against the Eldar.

So then I had a wierd thought, what about Tau... Traditionally I've never thought much of Tau in a competitive environment. Their complete lack of engagement options really limit their capacity to crack certain armies. I've only played a handful of games with Tau too so much like the ferals for Castle Assault this force would be mostly theoryhammer. The basic plan is all about taking out support options and setting up targets for air engagements... easier said than done! We'll see how it goes over the weekend!

The other big problem was that the comp was about 19 days away at this point... and I didn't have a model painted... It was time for some speed painting! 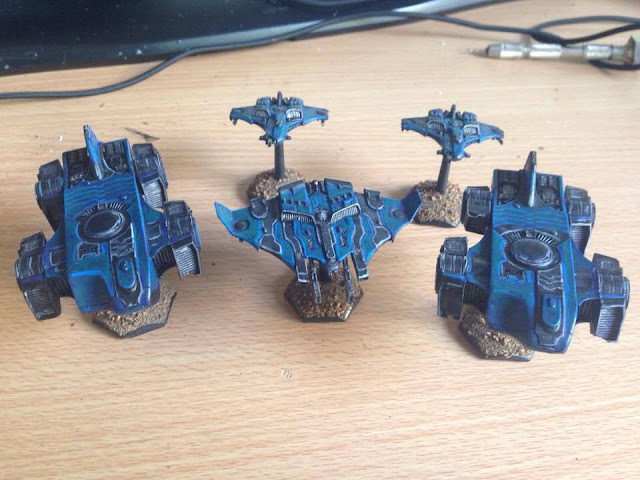 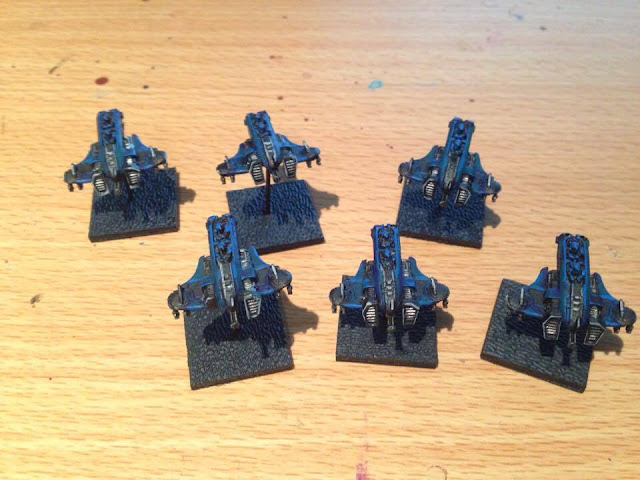 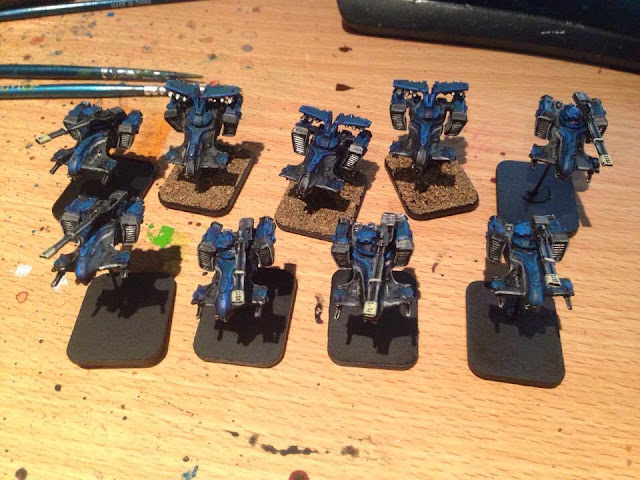 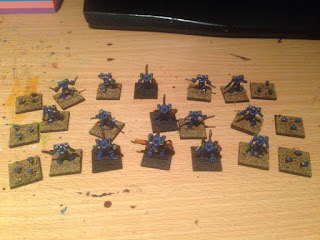 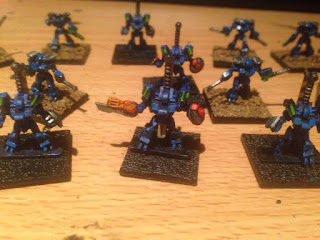 With bases all done etc the final product looks like this: 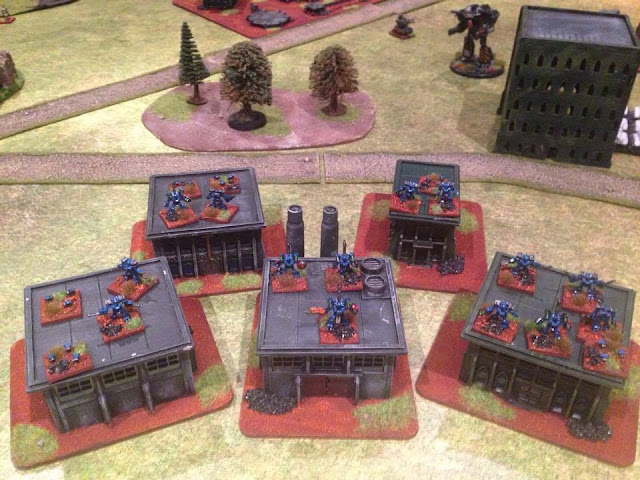 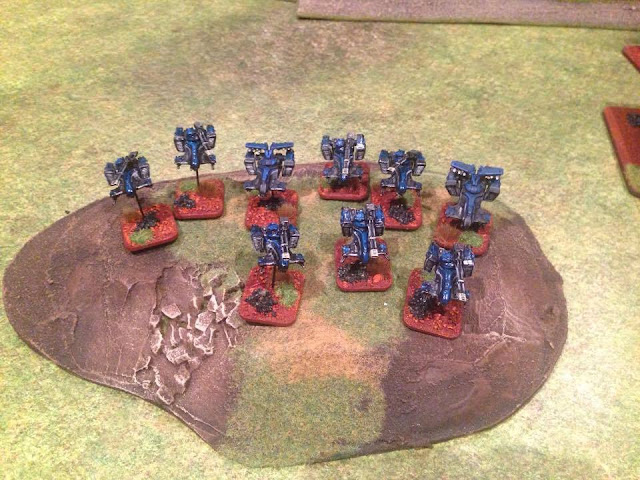 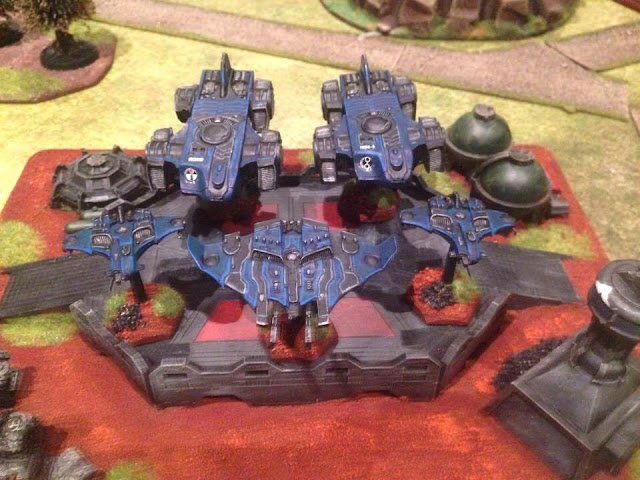 No idea if it will work on the weekend but it looks good and if nothing else at least I got it painted!

My long time gaming rival Kenny came on over to help me warm up the Tau for Cancon. Since he would normally run orks and there aren't any this year at Cancon we decided to have another crack with Cadians, this time using the Warlord list from Cancon this year.... Here comes the shortest battle report since Marines Vs Necrons...

Deployment
As the Cadians had lower strat they were responding to my deployment choices and given that I was rusty as hell I just went with the ol I'm unpacked over here so lets just play across the table. Mistake No1. Also given that I'm used to being the 2nd player to put down objectives I'm used to reacting to my opponents rather than being the one setting the tone, I'll talk more about this at the end but lets say I did this badly too. The net result is the gaurd all clumped up around their big bad boy and glaring angrily at the Tau Blitz whilst the Tau are all spread out wondering what they are supposed to do against all that firepower. 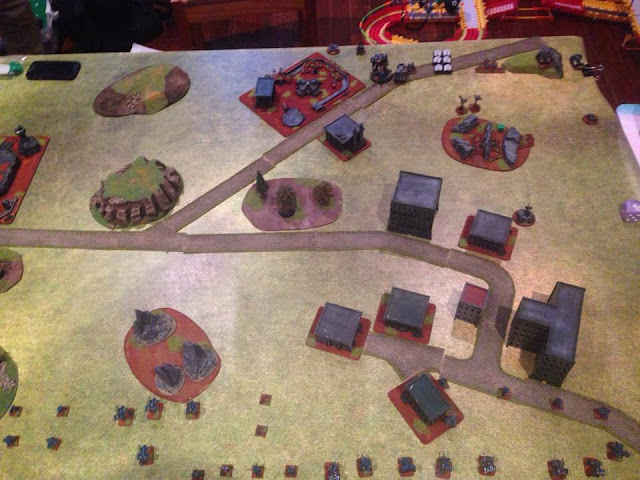 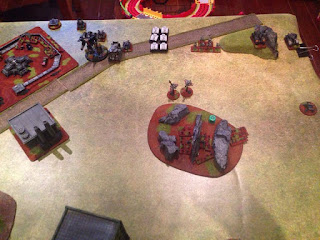 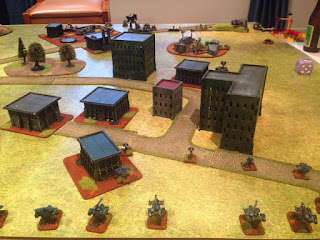 Turn 1
Cadians win initiative
Thunderbolts go on overwatch
Tau forget to use spaceship and advance a unit of suits instead
Shadowsword advances and snipes out a sky ray
Tau spaceship remembers to turn up and manages a hit on both shadowswords...doing 1 wound to each and breaking nothing
Second shadowsword advances and snipes another hammerhead, breaking the unit
Tau tetras advance behind the big rock on the left
Cadian HQ advances and picks off a tetra behind the buildings.
Tau respond by moving the hammerheads up to snipe a single shield off the HQ
Cadian sentinels advance on the double and use their autocannons to kill another hammerhead with a blast marker. Ouch.
Tau advance a unit of tetras to markerlight the cadian HQ but forget they can't fire seeker missiles when suppressed!
Cadian sentinels double leftwards and pick off two tetras with their autocannons... not going well!
Hammerheads advance and try to plink the cadian HQ, 3 hits took off the shield but nothing else!
Warlord Titan advances on the double and volleys into the remaining unbroken hammerhead unit. Kills 3/4 and breaks them good!
Cadian infantry double forward and put a blast marker onto the tetra unit amongst the buildings
Tau AX-10 flies on to snipe one of the shadowswords... cadian thunderbolts fly through the flak bubble of the skyray and take it out....
Cadian hellhounds advance in the double using heavy bolters to snipe off a tetra and break that unit.
Orca comes down on the cadian AA for a FF engagement. The suits kill 1 hydra and lose a suit in return. Thankfully they win the roll off by 1
Sadly they ended up too close to the cadian infantry guarding the blitz and were engaged in turn by karskin. In a very one sided engagement the suits all missed and 3 suits failed their saves. The remaining suits are wiped by the roll off after losing by 5.

Rally phase - all cadians except for the hydra rally.
All tau except the hammerhead unit fail.

If you are ever wondering what the definition of decisive is, you just saw it... ouch! 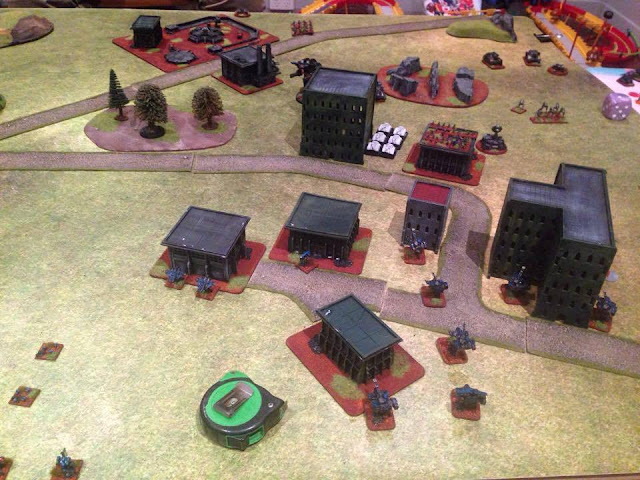 The Cadian final position is pretty decisive - the Emperor's armoured fist is squarely in the guts of the Tau ad has taken no significant damage. Tau are down to 6 activations.

Tetras are pretty useless - In this game I attempted to use the markerlights to hit valuable targets and they failed in every respect. The unit on the left advanced too early and got picked off by Cadian sentinels (who killed two) Whilst the unit on the right advanced well to light up the HQ only to have the railguns bounce and then be taken out by more sentinels. Interestingly this was my same experience when I fought against Tau at Castle Assault where Norto's Tau would use them as part of combined shooting engagements but they were so vulnerable to an engagement afterwards.

Spaceships aren't reliable - If you look at my first activation that's when I should have done the spaceship in an attempt to get an activation advantage... In the end though it would't have mattered because it did a single wound on both and achieved nothing... dammit.

Tau Suck at FF engage - Seriously... they struggled to take out Hydras...

Deployment is key - Tau had some shocking dice this game but ultimately the game was over before we deployed a model. Have another look at the deployment shot and the special lines I've added with my leet skillz. 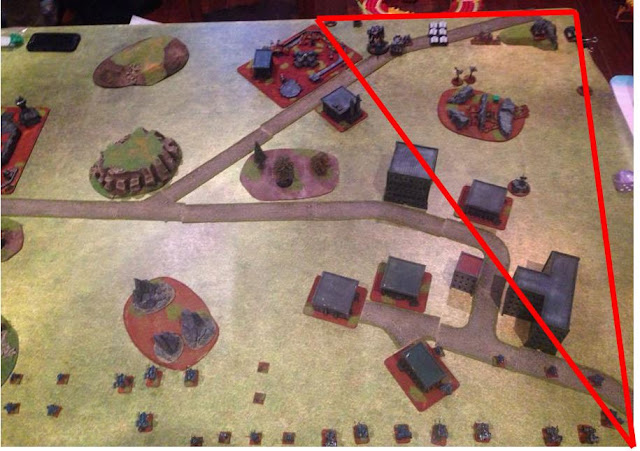 Now what you are looking at here is outstanding objective deployment (just not  by me...). Inside that triangle are both Blitz objectives, the Cadian take and hold objectives and one of the Tau ones. So if Kendall had sad his Warlord titan in the middle of that it's basically impossible for me to win on objectives without killing the Warlord. A perfect use of it when the Tau's goal should be to use speed to outmaneuver and spread out the slow moving gaurd. I played right into his hands and that's what I mean by this game being over before we deployed. If you look at the picture of the end of turn 1 you can see that Kenny did exactly what he should have done and swarmed that triangle good.

Lessons learnt! Next game will be round 1 at Cancon, lets hope for 2 full turns!