Not so Epic slow grow reaches it's conclusion... 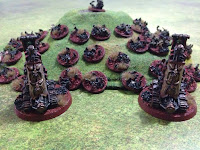 So three months of hard work and endless nagging by myself on behalf of everyone reading this has culminated in the definition of a mixed bag. I managed to get my chaos Cultists together pretty quickly but I'll save a re post of the complete army for the tactica article I'll get done soon. Here however is a few highlights of what the others managed:

Well we didn't quite make it there either readers
After some delays with paint supplies, and unfortunately my own growing apathy to the army list We only managed 2750pts painted at the end of the slow grow. (Painting an army I'd be happy to take to Cancon has consumed me currently)
What you see here is not the balanced list I planned to paint, but more what i felt like i could paint in my dwindling amount of time to reach the 3k points.


I am still very happy with how this army looks visually, and I know I'll be back to them over the following months to add another 2 units of of standard sisters, more rhinos, more lightnings, dominion and seraphim units.
Maybe our esteemed blog writer might do a "where are they now" post a couple of months down the track?
Until then,
Stay Faithful, Stay Vigilant

Christoper Smith
After 3 months in the slow grow i am pleased to show you my 3000 point night lords army, the picture shows an extra model if i want to swap and change, i hope you enjoy the army as much as i have painting it,(note to self, lightning on 6mm is tricky).

Zac Manning
Yeah so the slow grow
I started off really well with month 1 getting most of my army to about 75% complete painted
Then I hit snags with base supplies and other issues that put a big dampner you on my modelling enthusiasm
Then this month I was derailed by having a social life which is new, unexpected and scary development for myself lol
As a result the army is about 80% done and will be completed this week
Attached is a crappy photo of my tanks
More to follow 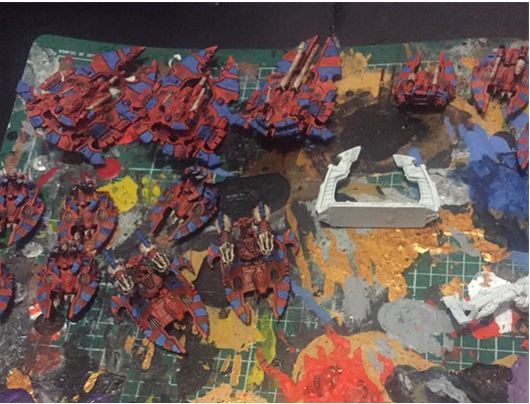 Dave Dingelstad
When I started the slow grow I had a painting plan based around the sleeping patterns of my youngest. Who would have thought they'd change so quickly... Probably should have had a plan B!      I'm still working to have it all done for Cancon, even though it looks like I'll be heading into the comp without having played a single game with the army. It worked at Castle Assault, I haven't had a game since, what could go wrong? =-O 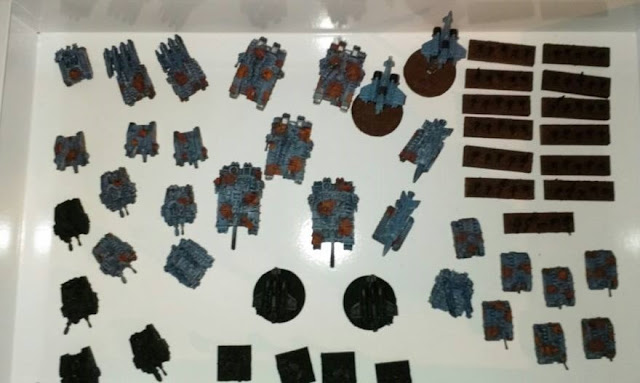 I had a very unproductive month, on top of which my Guardsmen mutated- suddenly growing pointy ears.
I managed two formations of Guardians plus 3 heavy weapon options (though only 1 formation is based), and some partly painted Falcons.
I also painted up a strange little quartet of Squiggoths.